Lotto: This weeks Lotto numbers were 9, 12, 27 & 29. There was no winner this week. Lucky dip winner was Craig Callan. Next weeks draw is for €5500. Keep playing and supporting your club on lotto.castleblayneyfaughs.com

Condolences : Castleblayney Faughs would like to offer our deepest sympathy to the family of the later Peter McGinn, Drumcrew.
Peter was a longtime supporter and player for the Faughs and was part of the 5 in a row team. He captained the team for one of the five.
Peter was a distinguished goalkeeper and played there for both club and county picking up an All-Ireland junior medal playing for Monaghan in 1956.
You could say goalkeeping was in Peter’s blood as both Peter’s father and grand-father played for Castleblayney in goals. Legend has it that his great grand-father played in that same position. In keeping with the tradition, Peter’s son Martin also represented club and county as goalkeeper.

Pitches: Our pitches currently remain closed due to current restrictions but all going well we may see this change at the end of month were some social distancing training may take place. Keep checking social media for any further updates.

Fundraiser: Our senior county team are currently running a shave or dye fundraiser in aid of some great causes. Show your support by going to their Facebook or twitter page and following the relevant link.

If there are any notes/events you wish to be published as part of the Notes please contact Brendan Carr on 087 292 6456, or email pro.castleblayney.monaghan@gaa.ie

This weeks lotto numbers were 2, 9, 17 & 26. No winner this week. Lucky dip winner was Mark McEntee. Next weeks jackpot is for €5400. Keep supporting and play online lotto.castleblayneyfaughs.com 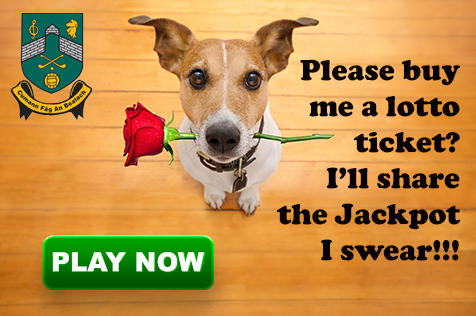 Next weeks jackpot is €5300. Keep playing at lotto.castleblayneyfaughs.com

A Cairde
As many of you are probably aware we have set up the Castleblayney Faughs Community Assistance group to help ease the disruption caused by the Covid 19 pandemic. It is aimed at but not limited to helping the most vulnerable in the community which ranges from the sick and elderly to parents of young kids and those who have no access to transport.
If as expected over the next few days/weeks the situation worsens we expect a significant increase in requests for our services. If you are in any position to help if even for an hour or two per week can you please text you name to the following number
0872375351.
You will then be added to the Castleblayney Faughs Community Assistance WhatsApp group of volunteers.
Many hands make light work for all so any help would be greatly appreciated.

Registration:Please spread the word. Registration is just around the corner and all players and members must be registered for the following year.Is is vital for players to be registered so that they are fully covered by the GAA Injury Fund. We are holding 3 registration sessions, all of which are in the Press Room at St. Mary’s Park (down at the pitch). Thursday 5th March 7.00pm – 8.30pm
Friday 6th March 7.00pm – 9.00pm
Saturday 7th March 10.00am – 1.00pm
Fees the same as last year:
Family: €60, Full (18+): €50, Juvenile: €20,Social: €20
Cairde option (25€/month) which includes a Faughs jacket + entry into monthly prize draw for €100 & €50 END_OF_DOCUMENT_TOKEN_TO_BE_REPLACED