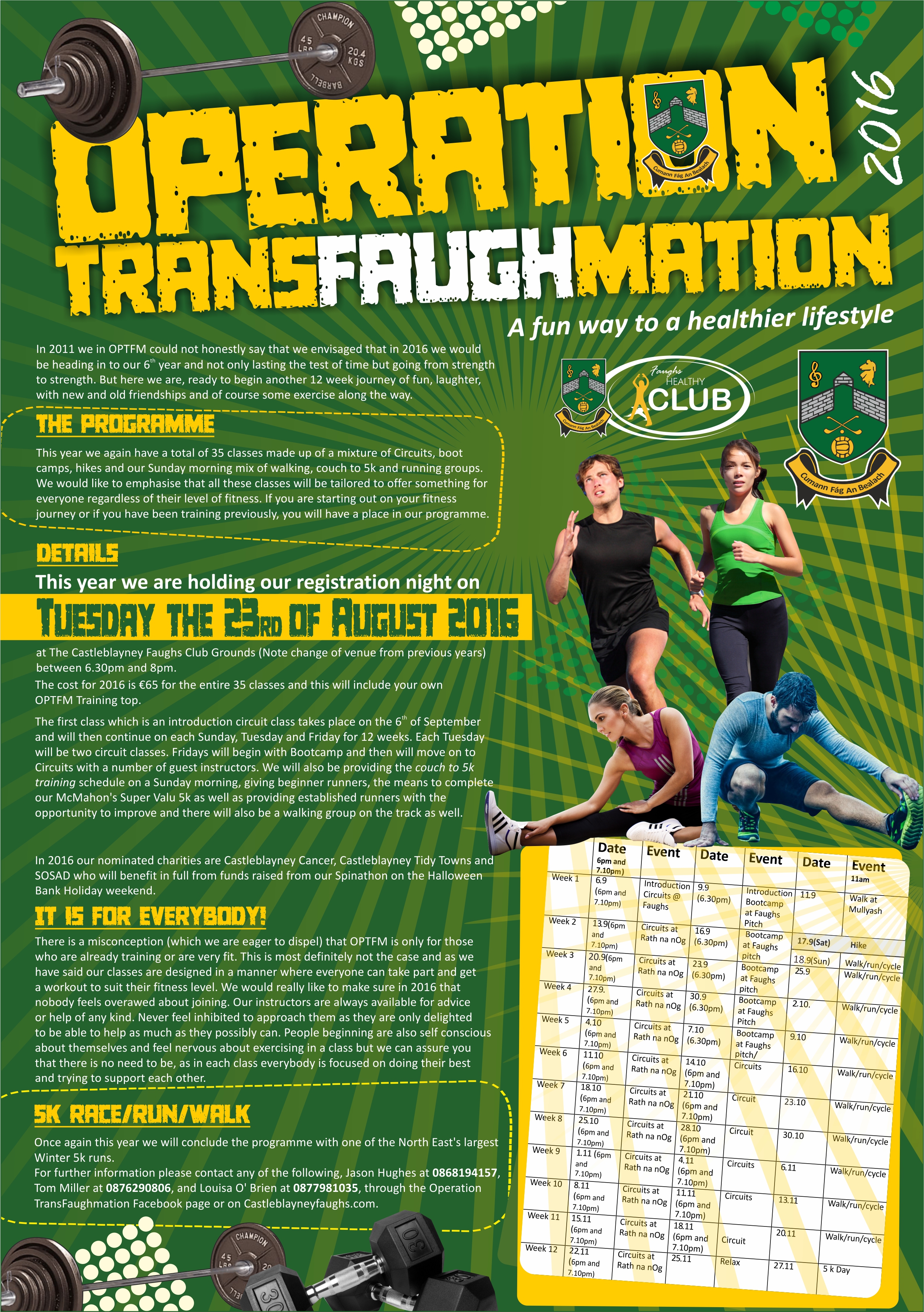 Operation TransFAUGHSmation: Wohoo!!!!. Operation TransFAUGHSmation is back for what is now our 6th year and once again we have 12 weeks of exercise and fitness suitable for everyone as we continue to achieve our aim of making Castleblayney the fittest community in Ireland. This will all kick off on Tuesday 23rd of August with our annual Registration Night in the Faughs Media room between 6.30pm and 8pm. We will keep you informed each week of the schedule.

Senior Ladies: Our Senior Ladies travel to Doohamlet to compete in Round 5 of the Senior League on Thursday the 25th August 2016 at 7pm. All support would be greatly appreciated.

Under 8 Boys: There will be no training this week the next round of Go Games is scheduled for St.Marys Park on Saturday 27th of August when we entertain Scotstown, Corduff, Donaghmoyne and Oram.

Under 10 Boys: The boys travelled to Clones for the all-county blitz, we had three teams enter with all teams showing the improvements that they have made over the Summer; the boys are scheduled to have Go Games this Saturday in the field at 10am, we will be playing Scotstown, Corduff, Donaghmoyne and Oram

Under 12 Girls: Our under 12 girls have performed well in recent weeks with victories over Carrickmacross and Aughnamullen and are now looking forward to a busy week with fixtures against O’Neill Shamrocks on Tuesday evening and Magheracloone on Sunday.

Under 12 Boys: –It was a tough weekend for our under twelve teams as both the Senior and Development teams lost out to Carrick in both their Semi Finals, this brings down the curtain on their season, the Club would like to thank the players parents and their coaches Pete, John and the two Eddie’s who have put in significant time into coaching the two teams during the year. These young lads will prove to be fine Senior Footballers in the years ahead.
Match Reports: First up were the senior team, the lads started well, edging 1-2 to 0-1 in front after a few minutes, with Niall Rice finding the Carrick net. The young Faughs lads continued to play very well in the first half, with the influential Martin Joyce constantly been the driving force behind many of the Faughs attacks, ably assisted by the constant hard work of Jason Campbell in the half forward line. They should have been much further ahead at half time, some wayward shooting at times kept Carrick in the game.
The Faughs led at half time, but, knew playing against the elements the 2nd half would be tough. The young lads more than held their own, and conceded a couple of very unlucky goals to allow Carrick back into the contest. With five minutes to go the young Faughs lads were 2 points ahead, but the concession of a rather scrappy and unlucky goal would eventually swing the tie in Carricks favour. Martin Joyce scored what looked like being the equalizing goal, which was somehow ruled out by the officials, allowing Carrick to clinch the game on a score of 3-8 to 2-7. Team: Shea Casey, Joe Carey, Nathan McArdle, Martin Joyce, Conor Ruddy, Kealan McMahon, Niall Rice, Jason Campbell, Kevin Flanagan, Ben Mallon, Ultan McMahon, Callum Campbell, Ross Maguire. Next up were the Development team, again playing in tough conditions in the first half. The young lads were slow to settle, allowing Carrick race into a 0-6 to 0-1 lead. An Ultan McMahon goal and a point from Cian Malone saw the Faughs go in a half time just 2 points down at 0-7 to 1-2. In the second half Carrick opened with 1-6 without reply, to open up what looked like a game winning scoring burst, but, to these young lads credit they bravely battled their way back into the game to reduce the gap to 3 points, and were very unlucky not to have a couple of goals towards the finish, but time just ran out, again with Carrick surviving to win by 4 points on a final score of 1-13 to 2-6. Team: Ionut Lungu, Sean Bishop, Jake McDonnell, Shea Casey, Nathan McArdle, Ben Mallon, Cian Malone, Arnus Gleeson, Joshua Conlon, Ultan McMahon, Jamie Ward, Daniel Kerr, Jake O’Connor, Ryan Mullen, Liam Duffy .

Boys Under 14: The Development team are down to play Carrick away on Friday at 6.30pm, 26th August, while the senior team have qualified for the Final of the shield competition against Magheracloone which has provisionally been fixed for Sunday 28th of August but we are awaiting confirmation of time and venue. Watch Social Media for updates.

Girls Under 14: The U14 Girls travelled to Emyvale on Monday evening to compete in the Semi-Final of the Division 1 Championship. The Girls got the match off to a great start and within the first 15 minutes they went 4 points ahead of Emyvale. Emyvale however pulled the score back to come within a point within the last 15 minutes of the first half. Both teams produced some thrilling football throughout the second half and it was literally score for score throughout. With 10 minutes to go Emyvale went a point ahead but our girls determined as ever fought back successfully to go a point ahead before the final whistle and won the match on a score line of 0-11 (Faughs) to 1-07.(Emyvale). The Girls are now through to the Division 1 Championship Final. Please keep an eye on social media and next week’s Club Notes when for details on the date and venue for the Final. Team Line Out: Molly Harte, Rachael Cannon, Melissa Carr, Eimear McKernan, Bronagh Malone, Aine McGlynn, Shona Brady, Sarah Wilson, Shannon Nolan, Emma Glynn, Jodie McQuillan, Aoife McGeough, Amy Connolly, Caitlin McGeough, Aoibhean McCooey, Mallaigh Duffy and Grace Hanratty.

Boys Under 16: The lads defeated Magheracloone last Thursday night in the league and now travel the short distance to Aughnamullen this Thursday night at 7pm before they concluded their league fixtures with a home game against Scotstown on Thursday 1st of Sept with a throw in time of 7.30pm.

Girls Under 16: Our U16 Girls travelled to Carrickmacross last Wednesday evening to play their final league fixture. A win may have secured the Girls a place in the Semi-Final, unfortunately however, under terrible weather conditions it was not to be as Carrickmacross were the better team on the night and won the match on a score line of 6-04 to 3-08.

Well Done: Two Well Dones this week; firstly, well done to all the Castleblayney Camogie Team on winning the Senior Championship, there was a lot of ladies who play football for the Club on the panel. Secondly, well done to the U12 Castleblayney Hurling Panel who won their league final last night, again there are a lot of duel players on this panel and we are delighted for them.