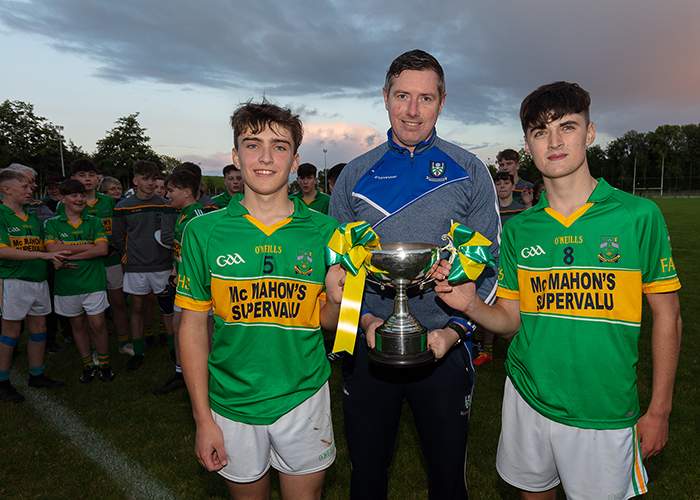 Greenfield Foods SFC: The Faughs took on Inniskeen at a damp Aughnamullen on Sunday past in the preliminary round of the senior championship.

This was a close fought match and in the first half the sides were level on no less than 4 occasions. In first half stoppage time the Faughs got the decisive goal to lead by 2, 1-06 to 0-07. ‘Blayney extended that to 4 points at the beginning of the second half, but Inniskeen did not give up and came back to level the game. The Faughs finished strong with a string of points to leave the final score Castleblayney 1-13, Inniskeen 0-13.

The lads now take on Traugh in Clontibret at 6.00pm on Saturday in the first-round proper.

Boys U15: Last Thursday 23rd August the Faughs U15’s Travelled to Tyholland to play Clones in the Boys U15 Division 2 Final. Clones had the upper hand in the two previous encounters prior to the Final, so the young Faughs lads knew they would have to be focused and at their best if they were to capture the title.

The Faughs started brightly and gained an early advantage following two fine points from Martin Joyce and Leo Maloney. Clones then edged in front 0-4 to 0-3 and looked to be in the ascendency at this point in the game, but the Faughs defence held firm, with Zachary McArdle, Joe Carey, Ultan McMahon and Charlie McQuillan all displaying some excellent defending skills. A good Faughs attack in the 20th minute yielded the first goal of the game, Niall Rice finishing a fine move, following an excellent through ball from Leo Maloney. A couple of minutes later the ever-impressive Niall Rice again found the Clones net. First half: Faughs 2-4, Clones 0-4.

Clones came roaring out of the blocks at the start of the 2nd half, and by the 5th minute led by a point, 2-5 to 2-4. Clones were beginning to dominate the game at this point, and the Faughs were forced into some serious defending following sustained Clones pressure. After an excellent counter attacking move into the Clones Penalty area, the impressive Kealan McMahon was brought to the ground – Martin Joyce calmly slotted the resulting penalty and the Faughs regained the advantage which they would not relinquish for the rest of the game. Further points followed from Niall Rice and Conor Ruddy, before Niall Rice again found the net for a rampant Faughs. Nathan McArdle completed the Faughs scoring, before Clones grabbed what proved to be a late consolation goal to leave the Final Score: Castleblayney Faughs 6-9 Clones 3-5

The Final whistle was greeted by scenes of Jubilation from the young Faughs lads, a fine group of players who have shown great dedication, commitment and improvement all year.

Last week the under 12 girls played their second championship game at home to Aughnamullen. Having met before and Blayney taking the points from that game a fired up Aughnamullen team took to the pitch. The first half saw a close competition with only 2 points dividing the teams. The Blayney girls found it difficult to get going in a cold and wet evening in St Mary’s Park. Full time score saw Aughnamullen going home winners this time.

The girls have two matches this week, Eire Og at home on Tuesday 28th August 6.30pm and away to Scotstown on Friday 7pm

Our girls fielded Monday evening in their first championship match away to Truagh. Blayney were looking for revenge after losing the league semifinal to Truagh some weeks ago. The game started at a great pace with both teams giving signs of a tough match ahead. Blayney opened the scoring with a point and some minutes later Truagh came back to put themselves 4 points up. With constant exchanges in scores Blayney dug deep as they do to turn it around and rattled the net on a few occasions with some excellent team play. Half time score had the Blayney girls winning 4-6 to 2-1.

The second half started were the first finished with both teams showing their intentions of victory. The Blayney girls began showing their dominance taking some more well worked goals and points. Truagh, a team never to allow too much space also worked some fine scores. At the end of a wonderfully contested game where all players on the pitch emptied the tank Blayney girls came out winners on an impressive score line of 6-10 to 5-5.

A massive well done by everyone involved. The girls now meet Donaghmoyne in the semi final next week at home on Monday evening at 7pm.

Best Wishes: Best wishes to all our members who will be starting/returning to schools over the coming days.

Good luck and best wishes to all our squads and management teams who will be taking part in important matches as we reach the business end of the season. Please check for dates times and venues and support our teams as much as you can – all our players certainly appreciate it.

Give Respect – Get Respect: Can we ask that everyone attending games involving our Club to remember that a key aspect of our success at any level is showing respect. We ask that any contributions that you make are positive and supportive.

Girls U12: away to Scotstown on Friday 7pm