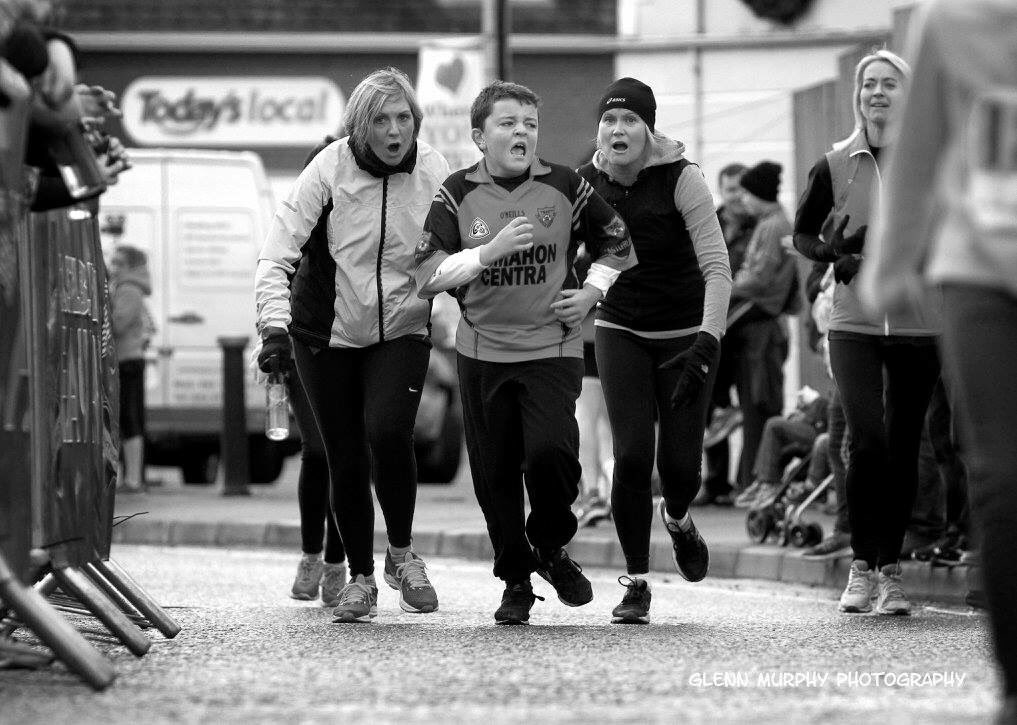 Operation TransFAUGHSmation & Mc Mahon Supervalu 5K: Sunday saw the running of the seventh Mc Mahons Supervalu 5K Race in Castleblayney, the morning which was perfect for running insured that over 750 runners turned up for the start of the Race, including all of the Operation TransFAUGHSmation participants. The race which is now one of the best races in the North East was packed with a quality field with thirty five clubs represented on the day as well as a host of other sporting groups.

The Under 14 race started proceedings at 1pm which saw these young athletes cover a 2 K distance, this race attracted over 200 children. The winner of this race was Odhran Hamilton from Armagh AC , with local lads Jake Mc Donnell and Luke Sanderson just piping Hazel Hughes to a place on the podium .

When it got down to the serious stuff of the Adult Race, there was no hanging about with a fast time always going to be required. Darragh Greene from Dunleer A.C, showed his intentions early on as he led a group of six out the Monaghan Road making a break for home at the 3K stage of the race. Darragh extended his lead over the last 2k to finish in a winning time of 15:21 just outside the course record of 15:19. First female home was Dona Mone from Monaghan Town Runners in a time of 18:41.

After the race all participants and supporters attended a packed Glencarn Hotel and were entertained as Stephen Dignam held a question and answers session with Irish Paralympic cyclist Eve Mc Crystal. Eve was suitably impressed by the efforts off all: “As most of the people know I am a Garda who is stationed locally and on the day of the race I am normally on traffic duty, so today I got to see the Castleblayney 5K up close for the first time. I have been amazed at what I have seen today, the community spirit generated by the Castleblayney Faughs at such an event is a great example of what clubs can do within their communities. The under 14 races is a great idea and the fact that there was an increase of over one hundred children from last year shows the appetite for such events and also encourages our young people into sport at an early age”.

Well done to all, especially Tom Miller and his team of dedicated volunteers who always put in so much hard work and effort into running Operation TransFAUGHSmation .
A special thanks to all the volunteers who helped in any way in organising the run – this truly shows that community spirit is alive and well in Castleblayney.

Photos Needed: Joe Hanratty is presently updating the history of the Faughs club which was originally published in 1984, and is trying to track down team photos from 1985 to the present day. Photos would be scanned and returned to their owners expeditiously. They can be given to Joe or to any member of the committee. If people have photos and wish to scan them themselves and email them to Joe directly that would be great. If emailing photos would you please include team names and the year the photos was taken. If there is more information re; the match, competition and venue at which the photos were taken that would also be greatly appreciated. Photos can be emailed to jjhblayney@gmail.com or to Castleblayney Faughs secretary Melissa at the following email address secretary.castleblayney.monaghan@gaa.ie

Club AGM: Our Club AGM takes place this Friday, Dec 1st, 7.30pm in the Castleblayney Enterprise Centre. There will be various reports from our different officers within the club. We encourage all of our members to attend – this is an important event within the club and is a great opportunity to raise any questions/issues on the night.

Juvenile Training: Winter training will finish up this week for our juveniles. Training will resume after Santa has visited at Christmas. As usual, we would be delighted to see new faces, so please spread the word. For more information on training please contact our Juvenile Officer, Brian Sherry, on 086 233 4287.