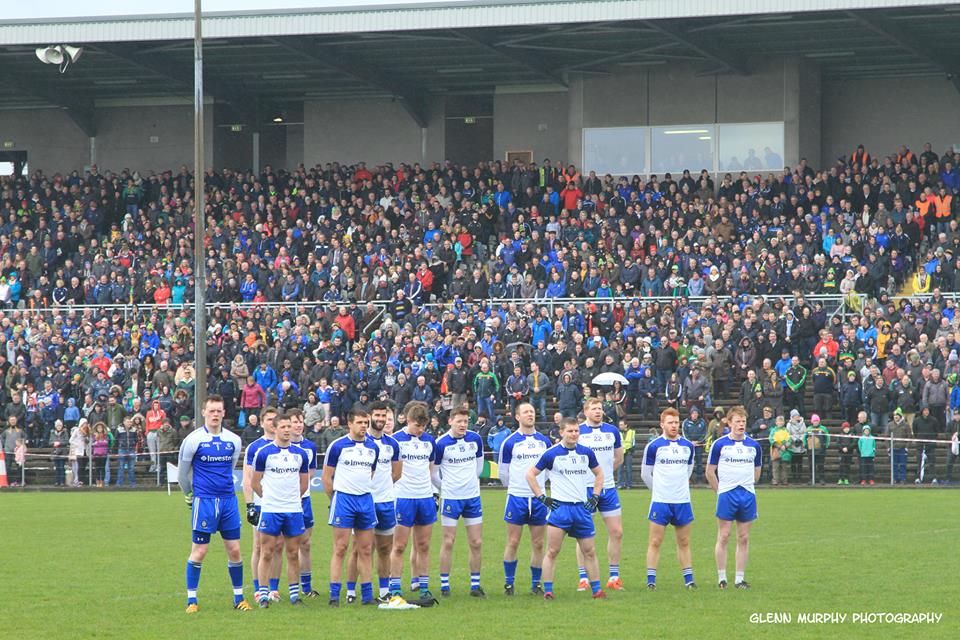 Club Strategic Plan: The Club Development Plan is on track to meet the deadline of the group meeting on Friday 8th of April, the meeting will take place in Our Lady’s Secondary School Concert Hall with a throw in time of 7pm. We have now completed all the group sessions and Friday’s evening meeting will be an opportunity for everyone to feedback to the wider group. Ger O’Connor will once again facilitate the session; he is aiming to keep the meeting moving as quick as possible. Can we ask once again that you all attend in numbers; we really want to get the plan to reflect the views of all within the Club, remember ‘It’s My Club’.

Registration Day: Saturday April 16th sees the Castleblayney Faughs club host a registration day at St.Marys Park from 9am to 4pm. This is followed by an awards night in the Glencarn hotel. We would urge current members and new members to attend these events. This is a wonderful opportunity to join the Castleblayney Faughs community and avail of the state-of-the-art facilities and coaching the Faughs club provides. We look forward to seeing you all on the day. Membership fee: FAMILY-€50, Adult-€30, CHILD-€20.

Senior Men’s: Saturday evening sees us travel to Magheracloone for the first games of this year’s Senior Football league, throw in time is 7pm; can we ask that all supporters travel in numbers to all our league games this year. This game will be followed by the first senior home league fixture of the year against Latton in St Marys Park on Wednesday 13th with a 7pm throw in. In a new initiative the Club will open the press room for a cup of tea or coffee after each of their Senior Men’s home league games for supporter to call in for a cuppa and a chat post the game. We welcome all players and supporters to call in to catch up on all club activities directly after the games.

Senior Ladies: Following on from the dramatic game between Monaghan and Donegal, our Senior Ladies took to the field in St.Marys Park to play Carrickmacross Ladies in the Senior Spring League on Sunday evening with a scheduled throw in of 6.30pm. Both sides initially struggled to cope with the poor weather conditions but Carrickmacross Ladies were quick to secure 3 quick goals in the opening 10 minutes which left our Senior Ladies on the back foot. Not ones to give up easily, our Senior Ladies battled hard and with two quick goals, secured by Aobhinn Fitzsimons and Shauna Coogan the girls had eaten into Carrickmacross early lead to leave a halftime score of 4-03 Carrickmacross to 2-02 Faughs. Again, our Ladies fought hard throughout the second half and scored a further 3 points all the time working extremely hard together as a team with some fantastic tackling and blocks put in by Maura McQuillan, Ciara Farrell, Laura McQuillan, Kate Deasy and Eileen Cullen, out ladies battled it out in tough wet and windy conditions to the bitter end leaving a full time score of Carrickmacross 6-07 Faughs 2-05. It is important to note that our Senior Ladies have only been formed this year and they were thrown straight in at the deep end with a Spring League to contend with a week after training initially commenced. These Ladies have put in a tremendous effort and have already really worked hard together as a team over the past number of months so we can only imagine with time behind them how good they can become.

Junior B: The Junior B’s travelled to Emyvale last Saturday night looking to keep their 100% record enacted, they started well with four points on the scoreboard after thirteen minutes through Gerry Brady, Michael Gurn and Damien Hughes before Emyvale took over with six unanswered points to leave the Half time Score Emyvale 0-6 Faughs 0-4. Unfortunately the second half saw Emyvale continuing to notch up further nine scores while the Faughs managed only two through Pierce Callaghan and a second score from John Beattie. With Senior Football getting started over the next few weeks the boys have a break until we play Ballybay on Wednesday 4th of May in St.Marys Park with a throw in time of 7.30pm.

Boys Under 12: The lads are scheduled to play Monaghan Harps on Saturday 16th of April; the Senior Game has a throw in time of 2pm while the Development team also play the Harps at 3.15pm both games are in Gavan Duffy.

Boys Under 14: It’s a big week for our Under 14 Senior Team as we take on the winners of Clan Na Gael (Oram/Toome) or Killanny in St.Marys Park at 2pm. Can we ask that all parents and coaches attend the game to support these future Faughs Stars. Following the senior game we will have the Development team playing at home game against Emyvale on Saturday 9th of April with a throw in time of 4.45pm.

Under 14 Girls: Our U14 Girls had their first Div1 Game of the Season against Carrickmacross last night. It was a home game for the girls and as they have worked their way up to Div1 they must now play all games on the Senior Pitch. This was a completely new experience for most of the Girls and it took a while for them to adjust to the size of the field. Carrickmacross were quick out of the blocks and rattled off 4 points in quick succession, however, our Girls came fighting back strong leaving a full time score of Faughs 4-04, Carrickmacross 0-6. In the second half our girls again put out a fantastic team effort with some particularly great displays of football from Sarah Wilson, Shannon Nolan, Jodie McQuillan, Emma Glynn, Shona Brady, Melissa Carr and Kaitlyn McGeough. As a whole the girls worked fantastically well together and it really shows how well they have developed and grown as a team, with some of these girls training with Castleblayney Faughs from U8’s. It is a credit to the Girls and their management team and we wish them every success going forward in Div1. The scheduled game for the U14 Girls is an away game to O’Neill’s on the 18th April 2016 with a throw in time of 6.45pm.

Under 16 Boys: Thursday 7th of April see the welcome return of Under 16 Div1 football back to St.Marys Park, as part of the on-going Juvenile process within the Club the hope is that we are now developing players who will be able to compete again in Div1, we wish the players and the management team well as they set out on another journey in 2016. Our opening game is against Monaghan Harps in St.Marys Park with a throw in time of 6.30pm on Thursday April 7th.

Under 16 Girls: The league fixtures for this year have now been published and we will play in the Division alongside Killeevan, Magheracloone GFC, Latton, Killanny, Tyholland and Carrickmacross Emmets with our visits game away to Killanny on Monday 12th of April with a throw in time of 7pm.

Minor Boys: The lads are in Division two which again is a move back up the Divisions, we will compete this year with Killanny, Patrick Emmets, Clones, Blackhill/Oram, Emyvale, Donaghmoyne, Clan Na Gael, Carrick and Inniskeen. The Boys opening game is away to Killanny on Tuesday 5th of April with a throw in time of 6.30pm.

Table Quiz: Last Friday night saw the Faughs Ladies host a table quiz at Iontas in order to raise much needed funds for the club. Stephen Duffy acted as quizmaster for the night and with the assistance of Fiona Borden and Bronagh Hanratty, he provided ten very varied rounds of questions which provided great entertainment for all those who attended. In a very tight contest a team led by U14 Boys coach, Eoghan McTiernan, just edged their way to victory. The ladies also held their Draw on the evening and an excellent first prize of one night dinner bed & breakfast in the Carrickdale Hotel was won by Mary Clare Mc Dermott, Second prize of a two month membership of the Glencarn Hotel was claimed by Iontas’s very own Pat Rafter and finally Third prize 50 euro meal voucher for The View Restaurant Concra Wood was won by Charlie McQuillan. During the interval Darren McQuillan, the Ladies Club Chairperson, thanked all those who supported the quiz and the Draw, the very generous sponsors and all those who helped on the night.

Monaghan v Donegal in St.Marys Park: What a day! Credit to everyone involved in making it a very memorable occasion for all the Monaghan and Donegal players, managers and supporters, we knew it was going to be a big crowd when we had people starting to queue outside to come in two hours in advance of throw in. The weather conditions were poor but that did very little to dampen the electric atmosphere, Monaghan struggled early on and found themselves down by 1-4 to no score before some great work by Dermot Malone set up Daniel McKenna to find the back of the Donegal net, the score kicked started a Monaghan comeback and when Colin Walsh kick the winning score in injury time the deafening cheers could be heard on the main street. Well done to everyone involved in pulling the game together, County Board, Club Committees and all the ground staff; a big word of thanks has to go out to the army of stewards we had on the day, well done to you all, a proud occasion for every club person.

50/50 Draw: This week saw the second week of our 50/50 draw which proved to be a great success, the concept works as follows: buy a weekly ticket for €2 for one ticket or €5 for three tickets, all tickets sold in the week are entered into the draw with 50% of all the takings going into the Jackpot and 50% going into the Club Development Fund, ultimately it means we have a winner each week. Tickets are available to purchases in McMahons Supervalu at the weekend and off a Club Seller on Saturday night around the town. This week’s winner was Brian Sherry, our Juvenile Chairperson; no doubt that he has some plan for the money.

Well Done: Where do we start with this week’s well dones. Firstly well done to everyone involved in organising the Big Game in a fantastic St.Marys Park played on a magnificent pitch. Well done to Niall Rice and Zach McArdle who played in the half time game during the Senior Match & well done to Orlaith Maguire who made her Senior InterCounty Debut Versus Kerry last Sunday a sign of things to come for the Faughs Ladies. And last but not least, to the great committee of people who were involved in the Table Quiz last Friday for the ladies teams, it was a great way to start a great weekend, we are very proud of everyone one of you.