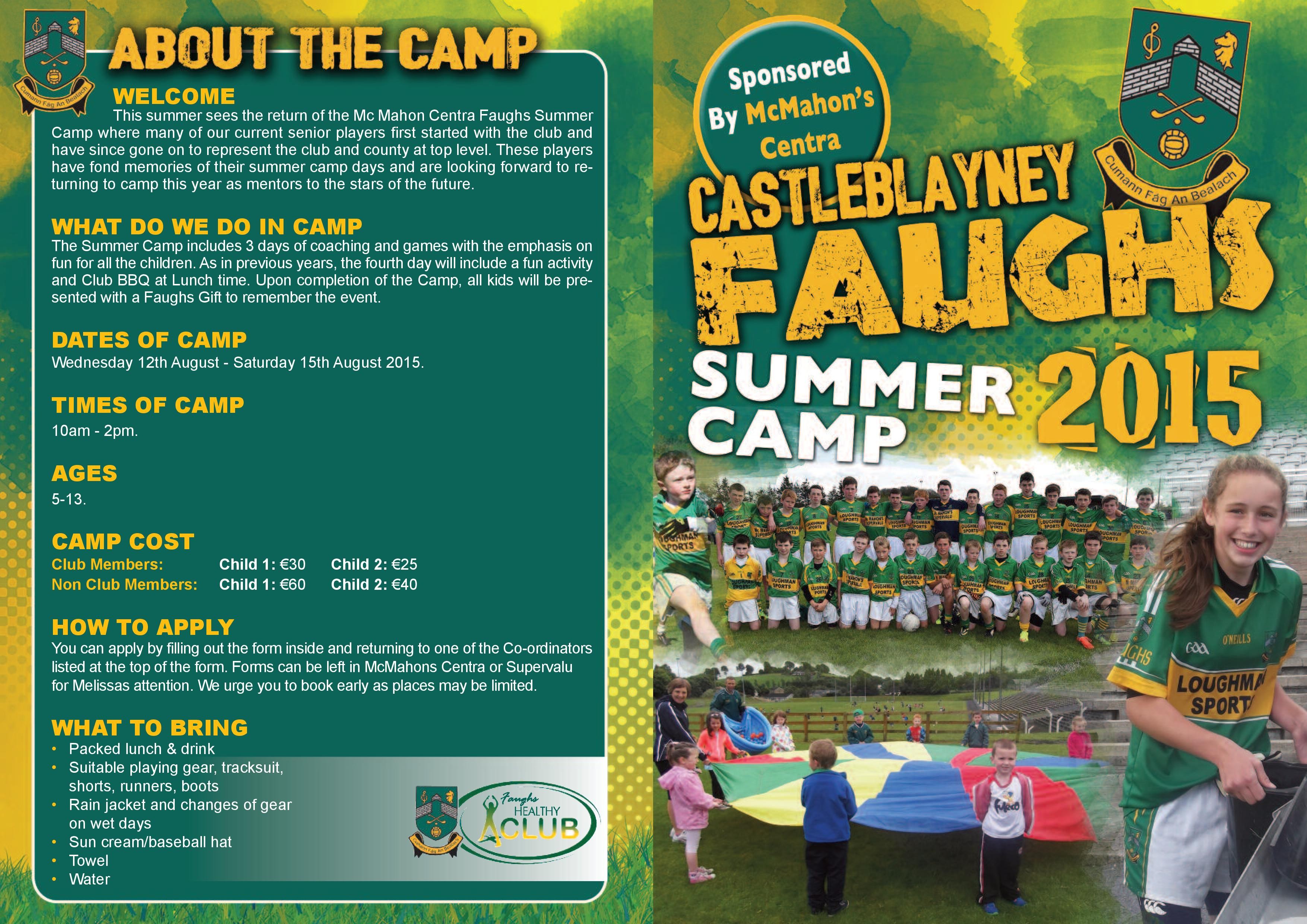 Senior Team: The Seniors played Donaghmoyne last Wednesday night in a “Star” game in St.Marys Park with both sides requiring the points. It was a strange game with Donaghmoyne finding the net three times in the first half to lead at half time by two points. The second half was nip and tuck as both teams traded point for point until the Faughs eventually got their noses in front with a Ciaran Hanratty point in the twenty fourth minute, this was followed by another point with two minutes to go. The results now moves us up to sixth in the table on eleven points and we now play Magheracloone in Round 14 of the league on Wednesday the 12th of August with a throw in time of 7.30pm, followed by an away game to Ballybay on Sunday 16th of August at 12.30pm. The Senior Championship will kick off on Sunday 23rd of August when we play Monaghan Harps with a throw in time of 2pm, venue yet to be confirmed.

Summer Camp: This week sees the Juvenile invasion of St.Marys Park as everyone gets ready for the McMahons Centra Faughs Summer Camp on Wednesday to Saturday, with lots of coaching , craic and games this always ranks as one of the children’s favourite weeks of the year, if you are free why don’t you come out to help, it literally takes an army of people to make it happen so an extra pair of hands are very welcome. All parents, supporter and club members are very welcome to attend the prize giving BBQ in the field on Saturday afternoon.

Street League: The street league unfortunately had to be postponed last Wednesday due to the weather the plan is that we will incorporate the Street League into the Summer Camp activity during the week , the table is still lead by The Crescent with Paudie Heavin leading a captain’s part supported well by Ultan Mc Mahon, Cian Malone and Diarmuid Kelly. Lane Harps led by Pauric Bolger are four points adrift with Muckno Street led by Ethan Smyth a further point behind, with two rounds still to go, you would be foolish to write off Leo Maloney’s Main Street with quality players like John Joyce, Aidan Hughes and Daniel Kerr they could make a late charge to reach the finals.

Boys Under 12: Friday evening saw the Under 12 team play host to Carrick in the Division 1 Coyle Cup Semi Final, the Faughs started very well with a couple of great goals early on opening up a four point lead and the boys went in at half time deservedly in front by three but a quick start by Carrick after the break saw them wipe out the deficit within three minutes. The Faughs lads never gave in and they battle for every ball, giving their all but with a few minutes to go Carrick got that vital goal which saw them advance to the final. Well done to the Faughs team and coaches who have shown great improvement over the last twelve, they have shown that if you listen to your coaches and put in the individual practice that you can make significant progress as a team. The Under 12 Development team are down to play Monaghan Harps in the their final this Saturday, time and venue yet to be confirmed.

Girls Under 12: The girls continued their good run in the league when they entertained Emyvale last Sunday morning in St.Marys Park, Aoibhean McCooey scored the opening goal and the Faughs looked to be cruising as they led by 1-3 to no score but Emyvale had a very different view on how proceedings would go as they narrowed the gap to two before half time. The second half proved a great tussle with both teams having lots of possession but neither side could make it count on the scoreboard. With time almost up Emyvale got their noses in front but one last attack saw Niamh Mullen from the Faughs overturn the ball and set up Aoibhean McCooey for her second goal for a Faughs win. We are awaiting next week’s fixtures and will confirm this week’s game via text during the week.

Boys Under 14: The Under 14 Senior team are in a do or die situation this Thursday when they play Latton away with a throw in time of 7.30pm, the must win they two remaining fixtures if they are to make the semi-final of this year’s Mason Cup the last game will be a home game against Scotstown on August 22nd at 1.15pm. The development team next game is on Thursday 13th of August when we play Monaghan Harps at 6.45pm while the last game for the boys will be against Clontibret on August 22nd at 12pm at home is St.Marys Park.

Boys Under 16: The Lads had another walk over versus Eire Og last week, with the league now concluded the boys will play Cremartin in the semi-final with a date still to be fixed, the next game for the boys will be the Championship Final which is against this Corduff on Thursday 20th of August with a venue and time yet to be confirmed.

Girls Under 16: Our U16 Girls play St. Bridget’s on Monday the 10th August 2015 in the semi final at 7 p.m. in St. Mary’s Park. This is a fantastic achievement for the girls in their first year as an established U16 team. We wish all the Girls and their management the best of luck and hope that they make it through to the final.

Minor Girls: The Minor Girls had a home match against Corduff on Friday the 7th August. The Girls had a shaky start to the game and Corduff capitalised on their nerves and led by 12 points at half time. However, our Minor team showed their true colours and determination in the second half and fought hard to level the match and to follow through and win by 2 points at the end. The management were extremely proud of the girls for their gutsy performance. There were a lot of standout performances on the night but it was ultimately a solid team effort which resulted in the win for the girls. The Minor Girls are next out on Monday the 17th August 2015 at 7 p.m. it is an away match against Killanny and all support would be greatly appreciated.

Minor Team: We have had a good year of improvement with these young players and the Club would like to thanks them all and the coaches for a great effort.

Well Done: This week’s well done goes to Joshua Walsh from the Under Sixteen team who was picked to represent the Ulster under 16 team last week in Armagh, from all accounts Joshua played really well. Joshua is one of our rising Stars and hopefully it won’t be too long before we see him in The Clubs Senior Jersey . Well done Joshua.

Hard Luck: Unfortunately the County Team fell to Tyrone in the All Ireland Quarter Final last Saturday, the team just didn’t to seem to play as well as they can and a bad day at this stage of the Championship means that you will ultimately be knocked out. The disappointment was huge among
players, management and supporters but when people reflect on the year in the long dark evenings they will see that progress has been made by our County Players yet again and we will look forward to another year in Division 1 and hopefully we can make that big step past the All Ireland Quarter Final. Well done to Dermot and all the team and management.

Operation TransFAUGHmation: Wohoo!!!! Operation TransFAUGHmation is back for what is now our 5th year and once again we have 12 weeks of exercise and fitness suitable for everyone as we continue to achieve our aim of making Castleblayney the fittest community in Ireland. This will all kick off on the 25th of August with our annual Registration Night. We will keep you informed each week of the schedule.

Respect Initiative: Last week all the Club Chairpersons, Secretaries and Youth Officers from every club were asked to attend a County Board meeting where they were address by County Board Chairperson Padraig Sherry, Youth Officer John McArdle and Jarlath Burns, there have been a number of incidents at Juvenile games across the County and they are asking that each club plays there role in addressing the issues, can we ask that all our patrons, members, players, coaches and committee members remember that the players are children, the coaches are volunteers, that the referees are only young people, the future of our club depends on all of us developing the youth so we ask that any verbal contributions that you make are positive and supportive.