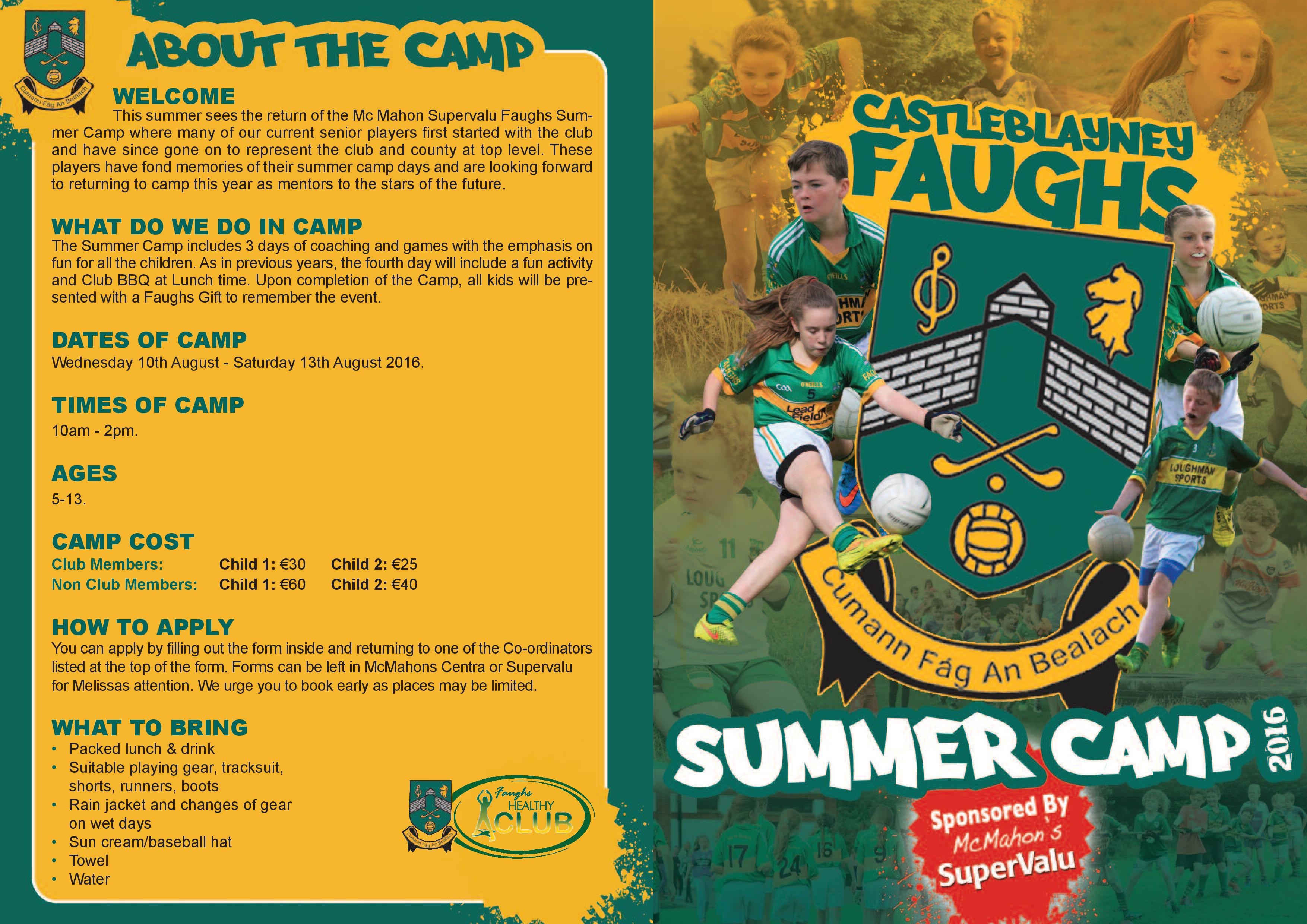 Senior League: The senior team lost out to Monaghan Harps last Sunday at lunch time, when there were defeated by one point, the Harps were the stronger outfit and led at Half time by 7 points to two, the Faughs scores coming from Brendan McElroy and Ciaran Hanratty both from frees. The second half saw the Harps extend their lead to seven points before a Faughs comeback started with points from Dermot McArdle (2) Aidan McElroy and Dermot Malone to leave a goal in it coming into injury time , the Faughs throw everything at it with a shot hitting the post before a late scramble in the small box seeing someone got a boot on the ball to finish to the net to leave the game level , on the resulting kick out the Harps won a free and moved the ball down the left hand side where they clipped over the winning score, our next Senior League game is against Ballybay in St Marys Park on Sunday 7th of August, with next round of the Senior Football Championship against Monaghan Harps fixed for Scotstown on Saturday 13th of August at 4.45pm.

Junior B: We play Aughnamullen in the league semi-final on Wednesday 27th of July in St Marys Park with a throw in time of 7.30pm.

Senior Ladies: Our Senior Ladies travelled to Tyholland on Saturday evening to play their Round 3 fixture of the Senior League. Due to injuries and holidays we were missing a lot of players however that did not deter the ladies from battling hard to try and secure the win. The determination and team spirit of the ladies was evident in the second half having been 12 points down at half time the girls fought hard to reduce the deficit throughout the second half levelling the match at one point. Unfortunately, despite their best efforts the girls lost the match on a score line of Tyholland 5-09 to Faughs 4-08. Our next senior fixture is a home fixture on Monday the 1st August against Seans at 7 p.m.

50/50: Last weeks winner of €150 was Mary McHugh, Castleblayney, Congrats Mary. Tickets are on sale at McMahons Supervalu & in local pubs over the weekend, ‘remember if you’re not in you can’t win’.

Know Your Sport: In the final week of the “Know your Sport “Chris Froome defended his Yellow Jersey and as a result gave a further 125 points, the result leave Pat Lenaghan the winner with a score of 1,850 points, runner up was Bernie Mc Hugh while Patrick Grimley finished in third, thanks to everyone for taking part, thanks also to Eoghan McTiernan for doing the weekly calculations.

Street League: With the McMahons Supervalu Summer Camp just around the corner, the traditional lead in of the Street League will now take place, teams have been picked, Coaches appointed with kick off this Wednesday 27th of July at 3.30pm, round two will take place next Saturday round three on Wednesday 3rd before we play further rounds during the Summer Camp. We will keep the table updated on Social Media and through the Club Notes.

Under 12 Boys: On Saturday the U12 boys senior and development teams played host to Scotstown in Round 9 of their respective leagues. First up was the U12 Senior Team. The young lads started brightly, racing into an early 1-3 to 0-1 lead, before Scotstown responded with a brace of points to narrow the margin. Some excellent goal keeping by Brandon McCague kept Scotstown at bay on numerous occasions throughout the first half. The introduction of young Jake O’Connor at half time paid immediate dividends as he scored two quick points to extend the Faughs lead. Scotstown came storming back, and narrowed the gap to 4 points after finding the Faughs net. The young Faughs lads regrouped and responded with a well taken Martin Joyce goal, which helped propel the Faughs to victory on a score line of 3-13 to 1-10. Team: Brandon McCague, Joe Carey, Martin Joyce, Kealan Mc Mahon, Ultan McMahon, Ben Mallon, Jason Campbell, Thomas Hughes, Callum Campbell, Jake O’Connor, Nathan McArdle, Kevin Flanagan. Next up was the U12 Development team, and in a closely contested first half the young lads went 0-4 to 0-1 up following some good play by Cian Malone, Jamie Ward and Jason Campbell. The young lads were very unlucky to go in at half time trailing by a single point at 0-4 to 1-2, following the concession of a very unlucky goal. The young Faughs lads battled well in the 2nd half, again edging a point in from at 0-7 to 1-3. Charlie Mc Quillan, Nathan McArdle, Jake Mc Donnell and Shea Casey all put in an excellent 2nd half performance, constantly driving on their team mates. However the concession of a very fortuitous goal late in the 2nd half saw Scotstown emerge as victors on a score line of 0-7 to 2-4. Team: Ionut Lungu, Jake Mc Donnell, Sean Bishop, Shea Casey, Nathan McArdle, Charlie Mc Quillan, Ben Mallon, Daniel Kerr, Jason Campbell, Liam Duffy, Jake O’Connor,

Girls Under 14: Our U14 Girls played Donaghmoyne in the Division 1 League Final last night with a throw in time of 6.30pm. It was a momentous occasion for the Girls, with some of them first starting out with our Club from as young as 5 and 6 years of age. The Girls have worked so hard together as a team under the expert tutelage of the Coaches that the Club provides. One Coach in particular that put in a lot of hard graft with this bunch of Girls and is sadly missed but in all of our thoughts was the late Pauline Devlin. A combination of the determination of the Girls and the results that they had achieved in their competitions paved the way for them to be promoted to Division 1. There was a lot of doubt initially from the Girls as to how they would perform in Division 1 but they soon dispelled any doubts they had in themselves with the results they achieved having successfully battled their way to the Final unbeaten throughout the League. Unfortunately, under the spotlight of the Final the Girls retreated somewhat and the nerves got the better of them. For the first 10 minutes of the first half the Girls kept Donaghmoyne at bay but Donaghmoyne scored 3 goals in quick succession which left our Girls with an uphill battle against a very determined and polished Donaghmoyne team. The Girls in fairness left everything on the field in the second half and even though at times it looked a forlorn hope for them they never gave up and wore their jersey with pride absolutely giving it their all to the final whistle. The final score line of Donaghmoyne 5-07 to Faughs 1-02 was in no way reflective of how these Girls have played throughout the league or indeed of how they performed with such bravery in the Final and they deserved so much more on the evening. Team Line Out: Kaitlin Brereton, Rachael Cannon, Melissa Carr, Eimear McKernan, Bronagh Malone, Shona Brady, Shannon Nolan, Sarah Wilson, Emma Glynn, Molly Harte, Jodie McQuillan, Aoife McGeough, Amy Connolly, Caitlin McGeough, Aoibhean McCooey Subs: Emily Nugent, Mallaigh Duffy, Meggy Alpine, Aoibhe Bolger (Grace Hanratty and Aine McGlynn).

Boys Under 14: The Senior Team are in the Shield Competition with their first game against Magheracloone on Saturday 30th of July in St Marys Park with a throw in time of 12pm, this will be followed by an away fixture to Truagh on Saturday 13th of August at 12pm .The development team had a good win over Emyvale last week which now places them in the Division 5 Cup Competition, their first fixture is against Monaghan Harps at home on Saturday 30th of July with a throw in time of 3pm.

Boys Under 16: The lads now play Magheracloone in the semi-final on Thursday 28th of July with a throw in time of 7.30pm; this will be another tough encounter so we would ask that all supporters come out and cheer on the boys.

Boys Minor: The Minors were defeated by Emyvale last Thursday which finished off their difficult season, we would like to thanks the players and coaches for their efforts throughout the year.
Girls Minor: Our Minor Girls are due to play Killanny at home this week; however we are in the process of confirming a date for this fixture and will post details of the match on Social Media as soon as it has been confirmed.

Summer Camp: The McMahons Supervalu Faughs Summer Camp takes place on the 10th-13th August. Application forms for the camp will be available at training over the coming weeks and also in McMahons Centra & Supervalu. We ask that you return the forms as soon as possible to help us plan for what promises to be an action packed Camp.

Well Done: This week’s well done goes the Claire, Francis McElroy and their boys. On Sunday with fifteen minutes to go Liam McElroy came onto the pitch after a lengthy spell out injured, he was quickly followed by the returning Aidan, while both Martin and Brendan were already on the pitch, that meant we had the four McElroy brothers on the pitch in a Senior League Game for the first time, well done to the whole McElroy family, a truly great Faughs Family.