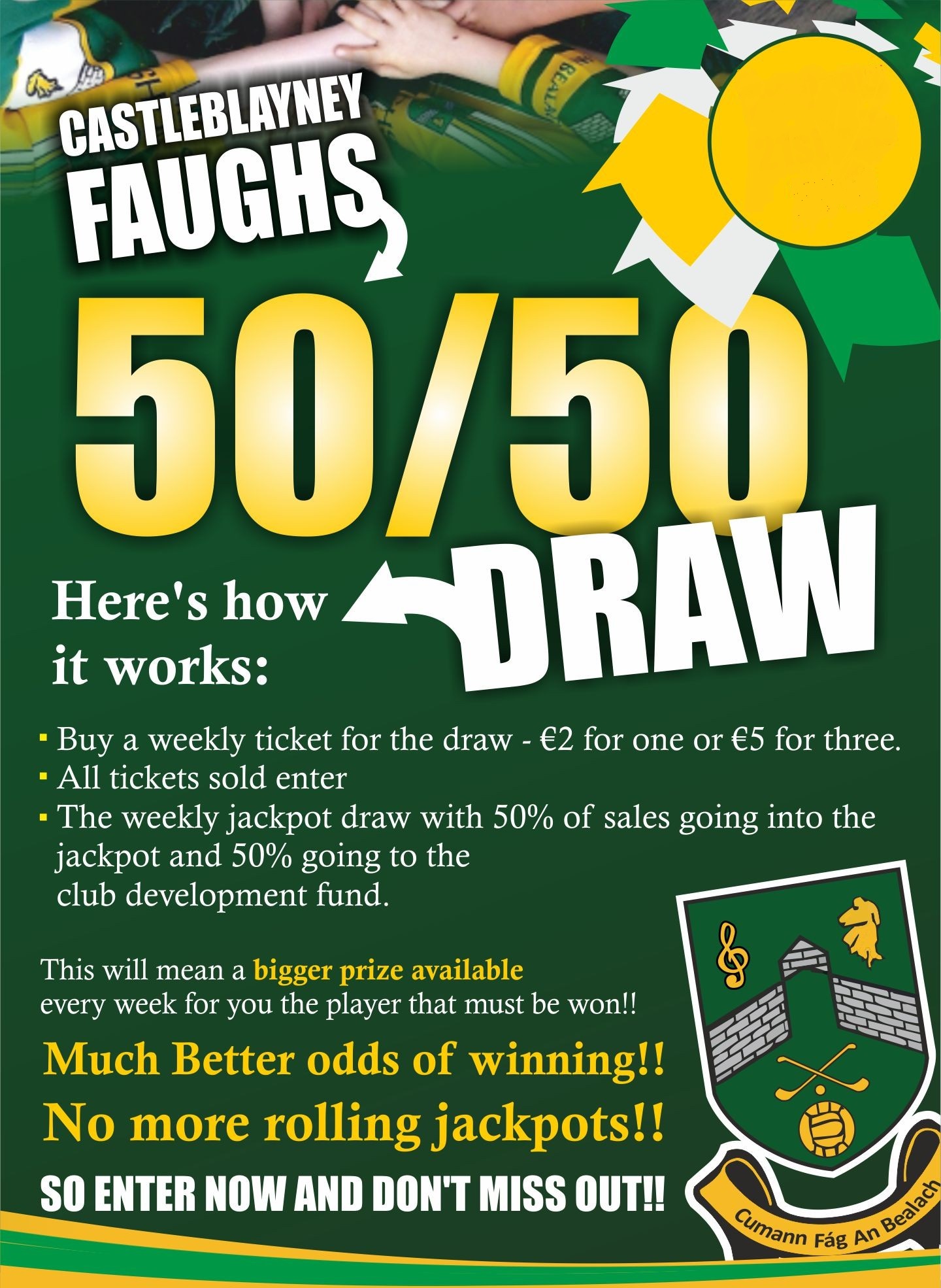 Club Strategic Plan: The Club Development Plan is on track to meet the deadline of the group meeting on Friday 8th of April, the meeting will take place in Our Lady’s Secondary School Concert Hall with a throw in time of 7pm. This week’s meeting sees fund raising and community groups take centre stage with all outputs due to be confirmed by the end of the week. To date there has been some great engagement and some very positive ideas that will keep the club going in the right direction for the next few years.

Senior Ladies: The Senior Ladies played Donaghmoyne last Monday afternoon, in a game which we always knew was going to be a big learning curve for our ladies, we did quite well at times and we continued to improve as each game goes along. On the day we had good performance from Sheena McKenna, debutant Muireann McHugh, Zoe Brady and Aine Clarke. Next game in the league will be against Carrickmacross on Sunday April 3rd with a throw in time to be confirmed as the original fixture clashes with the Monaghan V Donegal game. Confirmation of the fixture and time will come through the Management team during the week.

Junior B: The Junior B’s had their second win of the league when they took on Cremartin in St Marys Park last Saturday evening. With JB (John Beattie) operating on the edge of the square as the target man the boys used him well to opened up a four point advantage with some nice scores from Fintan Finnegan, John and Mark Kelly before Cremartin responded with seven unanswered points to leave three in it at half time. The second half saw the Faughs come out strong with JB finding the net, followed by a second goal from the impressive Fintan Finnegan following some good team play, Cremartin managed to get a couple of points to keep the match evenly poised but with time nearly up points from Ronan McNamara and Fintan again, insured that the points would stay in Blayney. Best on the day for the Faughs were Goal Keeper Paddy Conlon whose kick outs were expertly delivered; Daniel McCarthy at the back continues to show good improvement while Fintan Finnegan and John Beattie showed well up front. Next week’s game is an away fixture against Emyvale with a throw in time of 6.30pm. Keep it going lads.

Boys Under 12: The lads are scheduled to play Donaghmoyne this Saturday, the club are looking to rearrange the match, we will update everyone with our plans over the next few days.

Boys Under 14: The Development team got their season under way last Saturday when they travelled to Gavan Duffy to play the Harps, a deluge of rain just before throw in made the conditions very very difficult for both sides but credit to these young players for making the best of terrible conditions to offer up a great entertaining match. The young Faughs battled really well right through out, the Faughs boys while physically smaller in size showed great character as they kept taking the battle to the Harps; leading by one at half time the Faughs came out fighting and extended their lead with a Cillian Hanratty goal before the Harps playing now with a strong breeze kicked seven unanswered points to leave three points in it. As often happens in Juvenile Football the Faughs went all out into attack to getting an equalising score and when the ball was blocked on the Harps line they moved the ball quickly and scored a goal against the excellent Pauric Bolger in the Faughs goal to win by six. Best on the Day for the young Faughs were Goal Keeper Pauric Bolger, Paudie Heavin who worked tiredly at the back, Oisin Ward and Odhran McArdle, up front Keith Morgan and Leo Maloney got on lots of ball. Team on the day: Pauric Bolger, Ethan Smyth, Conor McCooey, Zachary McArdle, Paudie Heavin, Oisin Ward, Odhran McArdle, Leo Maloney, Keith Morgan, Cillian Hanratty and Shane Morris. Next up for the Development team is a home game against Emyvale on Saturday 9th of April with a throw in time of 4.45pm. The Senior Team have their Championship Semi Final on the same day when they entertain the winners of Clan na Gael (Oram/Aughnamullen) or Killanny in St.Marys Park at 2pm.

Under 14 Girls: The fixture for the Under 14 Girls have now been made, it’s see the Club compete in Division 1 with Scotstown, O’Neill Shamrocks, Donaghmoyne, Carrick, Truagh, with our first game on Monday 4th of April when we take on Carrick with a throw in time of 6.30pm. Training will continue this week.

Under 16 Boys: Thursday 7th of April see the welcome return of Under 16 Division 1 football back to St.Marys Park, as part of the on-going Juvenile process within the Club the hope is that we are now developing players who will be able to compete again in Division 1. We wish the players and the management team well as they set out on another journey in 2016. Our opening game is against Monaghan Harps in St Marys Park with a throw in time of 6.30pm on Thursday April 7th.

Under 16 Girls: The league fixtures for this year have now been published and we will play in the Division alongside Killeevan, Magheracloone GFC, Latton , Killanny, Tyholland and Carrickmacross Emmets with our visits game away to Killanny on Monday 12th of April with a throw in time of 7pm.

Minor Boys: The lads are in Division two which again is a move back up the Divisions, we will compete this year with Killanny, Patrick Emmets, Clones, Blackhill/Oram, Emyvale, Donaghmoyne, Clan Na Gael, Carrick and Inniskeen. The Boys opening game is away to Killanny on Tuesday 5th of April with a throw in time of 6.30pm.

Table Quiz: The Ladies are holding their Table Quiz on Friday 3rd of April, teams are made up of four people costing €40 each, so let’s start gathering your teams. The quizmaster has been hard at work over the last few weekends pulling together lots of great questions. We are urging as many local people to attend on the night with a fun evening guaranteed for everyone. The first question will be asked at 7.30pm.

Monaghan v Donegal, St.Marys Park: With the Monaghan v Donegal game in the Allianz Football League confirmed for St Marys Park on Sunday April 3rd at 2pm, it will be all hands on deck this week. We have been working away during the close season with the Club Shop getting a face lift, new turn stiles built at the Dundalk Road side of the ground and the Club meeting rooms been redesigned for match day stewards .We will require a very large amount of stewards for this much eagerly awaited match, if you want to Steward can you please contact Melissa Conlon to be added to the rota. We will also have a few evenings were will be cleaning and tidying up so all help is great fully appreciated this week.

50/50 Draw: This week saw the first week of our 50/50 draw which proved to be a great success. The concept works as follows: buy a weekly ticket for €2 for one ticket or €5 for three tickets, all tickets sold in the week are entered into the draw with 50% of all the takings going into the Jackpot and 50% going into the Club Development Fund, which ultimately means we have a winner each week. Tickets are available to purchases in McMahons Supervalu at the weekend and off a Club Seller on Saturday night around the town. This week’s winner was Lucy Harte from Carrickagarvan – Congrats Lucy.

Well Done: This week’s well done goes out to the team behind the 50/50 Draw, Zana Lowry, Ruairi Farrell and Fundraising Official Paddy Conlon who put a great effort in these last few weeks. Running a club is a very expensive business so every cent raised through initiatives like the 50/50 draw are vital to keeping the club going. Well done to everyone who helped out and a big thank you to everyone who bought a ticket.