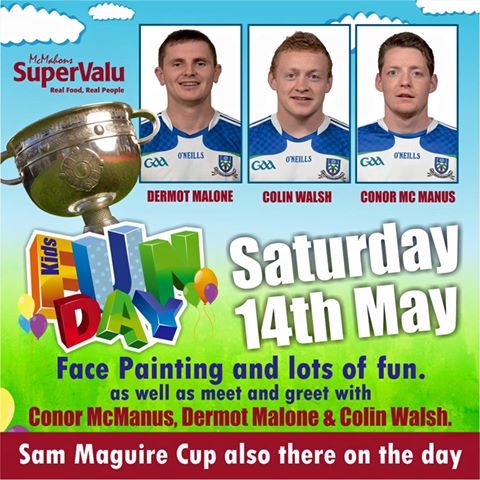 Faughs Friday Walking Club: Castleblayney Faughs as part of their 2016-2018 Strategic Plan, want to extend their healthy club initiative and enrich the lives of every member of the local community. One such initiative is a walking/social activity which is planned to commence on FRIDAY, 20th MAY 2016 at 11.00am in St.Mary’ s Park, to be followed by a social ‘cuppa’ in the Club Rooms. The only cost involved is the payment of the Club’s Annual Social Membership, which ensures every person is covered by Insurance. You are earnestly encouraged and welcome to join this club activity and meet and chat with old and new friends.

Breakfast Morning: Our annual Breakfast Morning takes place on June 5th in Iontas from 9am-12pm. Its the perfect opportunity to fill the bellies before you cheer on Monaghan in their opening Ulster Championship game. Our Senior players will be serving breakfast on the morning. We hope to see you all there.

50/50: This week’s winner was Vincent McDonald who won €200 Jackpot, remember if you’re not in you can’t win. Tickets are available to purchases in McMahons Supervalu at the weekend and off a Club Seller on Saturday night around the town.

Membership: Following on from our very successful registration day, the Club will now be following up with any members who have yet to pay their membership fee. We would ask all Club Members to pay their Memberships over the next few weeks. Membership fee: Family-€50, Adult-€30 Child-€20 and can be paid to Paddy Conlon, Stephen Dignam, Sean Mc Donald or Melissa Conlon.

Know Your Sport: The Club is running a Know Your Sport Competition over the next couple of weeks. Simply put, its 12 questions on different sports running from May to July (you pick the winners from each sporting event). The cost of entry is €20 and there is €1,000 in prizes. Entries to be returned this week.

County Stars at McMahons Supervalu: This Saturday, May 14th, sees County Stars Conor McManus, Colin Walsh and our own Dermot Malone visit McMahons Supervalu. From 11am-1pm the lads will be there along with the Sam Maguire Cup. There will also be fun activities including face painting. So pop down and wish the lads Good Luck before they start their Ulster Championship Campaign.

Senior Men’s Team: It was a mixed bag for the Senior Team over the last week , on Tuesday night we played at home to Latton and led 10 points to 6 at half time having played with the aid of a strong breeze, a goal apiece from Ciaran Hanratty and the returning Fergal McGeough insured the two points. On Sunday lunchtime we travelled the short distance to Doohamlet, on a beautiful day it proved to be a very tight affair, we failed to convert our possession stats into scores and ultimately paid the price as we were beaten Nine points to six. Our next league action isn’t until Sunday 29th of May when we entertain Monaghan Harps in St.Marys Park with a throw in time of 2pm. This Sunday we travel to Scotstown to play Truagh in the first round of the Senior Championship, throw in time is of 7pm, best of luck to the team and management .

Senior Ladies: The Senior Ladies lost their Senior League Semi Final to Sean McDermotts last Sunday evening. Unfortunately, the final score line of 8-05 to 2-06 in no way reflected the standard of football produced by our Senior Ladies. They fought hard to the final whistle and have to be complimented on how well they have come together and performed together as a team having only been formed a few months ago. They should be very proud of themselves for making it to the semi-finals of the Spring League and can only look forward to bigger and better results in the future.

Under 8 Boys: The Under 8 Boys have Go Games this Saturday morning in Cloghan with a throw in time of 9.30pm, we will leave from St Marys Park at 9pm sharp. We will have two teams playing and would encourage all parents to come out and support.

Under 10 Boys: We had three teams in the Under 10 Go Games last Saturday in Cloghan, played on a very wet morning the boys did well over all with lots of players getting plenty of touches, training for the Under 10’s continues this Thursday in St.Marys Park.

Under U12 Boys: The Competition structures have been announce this week which see the Club Senior Under 12 team play in Division 1 alongside Carrick, Clontibret, Killanny, Monaghan Harps and Truagh, this will be a double league with each team getting 10 games each with the top 3 reams qualifying for the Cup Competition while the next three will play in the shield compete for the shield. The Development team will play in Division 6 alongside Carrick, Monaghan Harps , Scotstown and Donaghmoyne. This will guarantee the boys eight games with the top three teams competing in the Cup and the next two teams competing in the shield final. Fixtures for all Under 12 Boys Games will be announced this week.

Boys Under 14’s: Both our U14 Senior & Development teams suffered defeats at the weekend, every lad worked hard however the results did not go our way. Our Senior teams next game is May 21st at home to Truagh at 12pm, which the Development Teams next fixture is the Championship Semi Final away to Carrick on 31st May at 7.30pm.

Girls Under 14’s: Our Under 14 girls travelled the short distance to Oram on Tuesday the 3rd May to take on Emyvale in the League. Unfortunately, we were missing a number of players due to injury so the girls knew that they were already on the back foot against a strong Emyvale team. Emyvale got off to a great start and scored two goals and a point in the first 5 minutes leaving our Girls on the back foot early on. However, not ones to shy away from tough competition the Girls soon got their momentum going and got some belief behind them and produced some fast scores to lead 5-04 to 2-01 at half time. Emyvale were primed for the second half and they quickly reduced the deficit in the first 10 minutes to bring the score line back to 5-06 to 4-04 however, our girls continued to extend their lead throughout the second half displaying some beautiful football and scores. They fought hard to secure a win of 6-12 to 4-03. It was a real determined team effort and the team line out and scorers were as follows: : Katilin Collins, Melissa Carr, Aine McGlynn, Shona Brady, Molly Harte, Aoife McGeough, Sarah Wilson (0-01), Jodie McQuillan (1(pen)-05), Caitin McGeough (4-02), Aoibhin McCooey (0-04), Grace Hanratty (1-0) Lauren O’Rafferty, and Amy Connolly. Our next U14 Fixture is an away game against Scotstown on the Monday the 30th May 2016.

Boys Under 16: Our Under 16’s scored a comprehensive victory over Magheracloone on Thursday on a score line of 6-21 to 2-7. An all-round top performance in summer like conditions maintained the boys good start to the season. Early scores by Josh Mone and Francis McGeough set the tone. Key contributions came from Ciaran Duffy in goal, defenders Declan Hughes and the returning Eoghan Casey. On a night where everyone shone the hard work of forwards Robbie Hanratty, Niall Carville and Gearoid Coyle created the platform for the win. Next game Thursday at home to Carrick with a throw in time of 7.30pm.

Minor Boys: Well done to our Minor Boys who recorded their first win of the year last Tuesday evening when they played Carrick in St.Marys Park ,the boys trailed at half time but showed great character in the second half as they scored 2-2 without reply in the last ten minutes to win on a score line of Faughs 3-7 Carrick 2-9, this win is just reward for the boys who have been work hard together, hopefully they can on with another win over the next few games. This Tuesday they travel to top of the table Donaghmoyne before they play Patrick Emmetts at home on May 17th both games have 7.30pm throw in.

Cuil Camps: The Cuil Camp is taking place in St.Marys Park starting Monday 11th of July, this year the Monaghan GAA Coaching and Development Team are looking to get the numbers confirmed as early as possible, the children will be getting forms through the schools over the next few weeks and we would encourage parents to return them as early as possible. This year the Camp Coordinator is former Faughs Centre Forward and County Coaching Games Officer Paul O Connor. For further details check the Monaghan GAA website, Brian Sherry on 086 2334287 or Paul O Connor 086 837 4827.