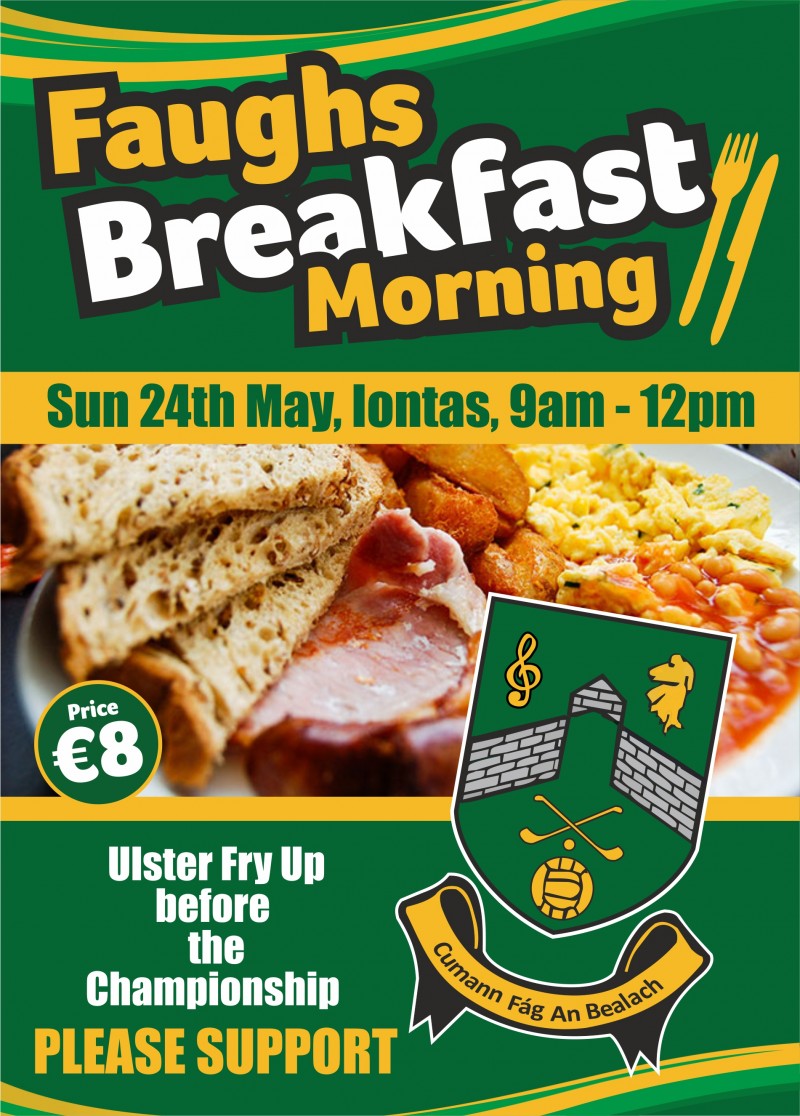 Senior Team: Sunday see the first of this year’s “Star Games” when the lads make the short trip up the road to play Donaghmoyne at 2pm , this game has all the signs of been a good tough encounter as both teams go in search of two valuable points.

Reserve Team: It was a disappointing weekend for the Reserve team, after a good win over Monaghan Harps in the league on Wednesday night there were high hopes of advancing in the O Duffy Cup when we travelled to Truagh on Sunday afternoon. In a tight first half the Faughs gave as good as they got and went in at the break one point down but 1-1 in the first two minutes of the second half saw Truagh open up a gap which they never surrendered despite the best efforts of Aidan Mc Elroy and Pauric Green who kicked some fine points. Our next match is in the league on Saturday 23rd of May when we travel to top of the table Ballybay with a throw in time of 7pm.

The Big Breakfast: The Club will hold a breakfast morning on Sunday the 24th of May in Iontas between 9am and 12pm. It’s an ideal opportunity for all Monaghan supporters to get an Ulster Fry before Monaghan play in their great rivals Cavan in the Ulster Championship in Kingspan Breffni Park at 2pm. Breakfast is great value at €8 per person and we encourage as many of you to come along for a good social morning. We would like to thank in advance all our sponsor who will help support the event.

Under 6: The boys and girls training now moves to the football field this Thursday night and will remain there from now until August, the boys and girls should were runners and old clothes.

Under 8: This Saturday see the Boys play in St.Marys Park at 10am in the morning, this is a big ordeal for these wee men as they don the Famous Faughs Jersey for the first time .We will play Clontibret, Sean’s, Truagh and Scotstown, all games are seven aside and are designed to give the boys the simple concept of what a game is. Can we ask as many parents to attend as possible, it’s a great mornings fun for everyone concerned, players, family and officials. Remember to take you water and gum shields.

Under 10 Training: Training as normal on Thursday evening, with Go Games on Saturday we will have to find a location to train, we will keep you updated during the week.

Girls Under 12: The Girls put in a great performance in their opening game at home to Killanny on Monday night in this year’s community games competition , the game was level at half time but the Faughs girls put in an impressive second half performance that saw they pull away to win by ten points, best on the night for the young ladies were Aoife McGeough, Aoibheann McCooey, Aine McGlynn, Caitlin Collins and Grace Hanratty, they now travel to Donaghmoyne on Thursday evening at 6.30pm.

Boys Under 14: What a difference a week can make in football, after the highs of winning the County Feile Competition came the lows of three defeats in a week. The Development team had two strong performances, the first against Clontibret last Thursday evening when they were unlucky not to get something out of the game, this was followed by a defeat to Monaghan Harps development team on Saturday in St.Marys Park, they concede a last minute goal, this defeat was even harder to sallow when they had come back from twelve points down to draw the game in the last five minutes. The Senior Team had a poor result on Saturday when they were beaten by the Monaghan Harps Senior team, the boys never got going and the result was a reality check for everyone that there is plenty of work required between now and the end of the season.

Girls Under 16: The girls have a home game on Monday 18th of May when they entertain St.Brigids at home in St.Marys Park with a throw in time of 6.45pm, the girls will be looking to continue on their impressive performance the last day out.

Boys Under 16: The Boys were off last Thursday night, we now travel to Smithboro to play Eire Og on Thursday the 14th before we play Clontibret in our last league game the following Thursday before the break. Lads keep the god work up and let’s make sure we keep the push on for the next few weeks.

Minors: The Minor team had a good win last week against Rockcorry, on a night when everyone played well they secured two points which now moves them into third in the league . We now play Latton away on Tuesday at 7.30pm in the last game before the exam break. Best of luck lads.

Best of Luck: The Club would like to wish all the boys and girls who are making their first holy communion the best of luck over the next two weekend, let’s hope the weather improves for all the parties that are planned but remember it can be great fun on a wet bouncy castle.

Car Wash: The Minor & U16s held their annual car wash on Saturday, and its fair to say that the lads worked hard all day. All monies raised go to their training fund for the coming year, and the lads would like to sincerely thank everyone who came out to support them. The management would also like to thank The Tidy Towns Committee and Castleblayney Plant Hire who supplied the hoses etc for the event.

Fundraising: In an effort to offset the cost of travelling to Feile, the Club will be holding a number of fundraising events on the lead in, the major event will be a race night which we hope to have in the early part of June, we are asking for the support of Everyone within the Club to make sure that this event will be a great success, so when someone comes and asks you to buy a horse or sponsor a race can you please do so, remember the money raised goes to support the players of tomorrow.

County Stars visit McMahons Supervalu: On Saturday every Monaghan supporter will have the chance to wish some of their County Stars Good Luck for the big game when Captain Conor McManus, our own Dermot Malone & Colin Walsh visit McMahons Supervalu this Saturday. The lads will be there from 1pm-3pm and are more than willing to stand for selfies & sign jerseys etc. Everyone is welcome & we would encourage you all to show the lads your support in the run up to the Ulster Championship.