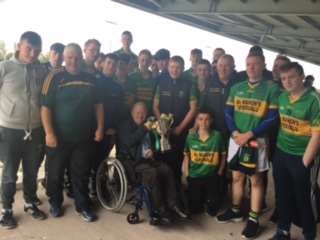 Senior Men: The Senior teams run of victories continued last Saturday afternoon when they defeated neighbours Doohamlet on a score line of Faughs 2-11 – 0-12 , the Faughs opened well with a great goal from Dermot Malone followed by a couple of points putting the Faughs 1-4 to 0-2 up after fifteen minutes, a well struck penalty by Malone just after half time left the Faughs in front by 2-6 to 0-4, Doohamlet rallied and brought the gap back to three points with fifteen minutes remaining but the boys responded with points from Marty, Brendan, Ciaran and Dermot to secure the two league points. Next week we travel to Latton on Saturday with a 3pm throw in time. We are currently second in the table with three games remaining.

Senior Ladies: We have no confirmed fixtures for the Senior Ladies at present so keep an eye on social media for any updates.

Operation TransFAUGHSmation: The programme continues a pace, Tuesday night we have circuits, with the third boot camp taking place on Friday night at the pitch with the walk/run/cycle on Sunday morning, a great way to build an appetite for a lovely Sunday lunch.

Under 11 Boys: The Boys travelled to Emyvale last Saturday to take part in the BC Tournament, they emerged undefeated from a group of Clontibret, The Watty Grahams and Currin before defeating Clontibret in the Quarterfinal, unfortunately they were beaten by Keady in the Semi Final by a last minute point. Well done to everyone involved, it’s just another good sign of the talent that is coming through at underage within the Club.

Under 12 Girls: The Girls had a heart breaking semi-final defeat to a good Emyvale team last Sunday evening; both teams were unbeaten in their section so it was always going to be a quality game. The Faughs started slowly and found themselves trailing by 1-3 to no score mid ways through the first half; they battle back and got back level before they conceded two quick goals. Often in juvenile football the game can get away from you, but we have a very determined group of young girls who battled like their lives depended on it, despite trailing by six points the girls battled back to draw the game as the game looked to be heading to a replay before Emyvale scored a 45 deep in injury time to win by a point. Well done to the girls, they have shown great improvement over the year and will no doubt go onto greater things over the years, thanks to all the coaches who have been working with the group right throughout the year.

Boys Under 16: Last Saturday saw a huge crowd travelling to Oram to see the much anticipated Division 1 league final between the Faughs and Aughnamullen, played on beautiful sunny day the conditions were perfect for a good game and neither side disappointed. The Faughs started well with the defence playing on the front foot led by centre half back Craig Callan and full back Kian O’Connor, while up front Gearoid Coyle was proving a very good link from defence to forwards keeping the impressive Francis McGeough supplied with quality ball. Indeed when Francis McGeough found the net, he put the Faughs up by seven which they stretch out to nine points with scores from Captain Gavin Kelly and the ever dependable Robbie Hanratty just before half time. In any game the opposition will always get their period of dominance and this game was no different with Aughnamullen taking control for the opening fifteen minutes of the second half a period which saw the Sarsfields cut the deficit to three points on a score line of Faughs 1-9 Aughnamullen 0-9 but these young Faughs are like teams of the past, the tougher it got the better they got. A great catch in the fullback line by James McAdam was quick transfer to Colm Bishop who moved the ball quickly to David Irwin who picked out Francis Mc Geough who was taken down for a penalty, which was coolly dispatched by Kian O’Connor to the back of the net and when Joshua Mone found the net from the resulting kick out the game was firmly in the control of the famous Green and Gold. Aughnamullen tried hard for that comeback goal but they denied on a couple of occasions by a very impressive performance by Kieran Duffy in goals who produce a couple of brilliant saves, the defence was very tight right throughout with James McAdam showing that he has the potential to be a fine defender in the future, Eoghan Casey was his usual determined tight marking self, Michael Hughes had a great game at wing back with his reading of the game particularly impressive, the centre of the defensive was very strong with Craig Callan and Kian O’Connor showing great drive and leadership right through out while Colm Bishop showed he is a real quality player despite not playing for two months due to a broken collar bone. In the Middle of the Park we had our Captain Gavin Kelly who has worked hard on his game right through the year and his work has certainly paid off with an excellent performance right through out, big Stephen Beattie took balls down from the sky and showed that he too has potential to be a future midfielder for the club. Up front we played like great Faughs teams of the past, we always looked dangerous with scoring forwards like Robbie Hanratty, Francis McGeough and Joshua Mone but there was some great spade work done in creating space, winning possession and delivering passes into the danger men, this work was done by the very hardworking Declan Hughes, Gearoid Coyle who was a great link between defensive and attack and David Irwin who showed great ability to unlock the Aughnamullen defence with a fine display of passing while also chipping in with a few points. Teams don’t win competitions unless they have strong panel and this was shown right throughout the year with Rory McGlynn, Shane Ward, Niall Carville, Joey Hughes, Kealan McKiernan and Max Rodgers all playing there part both on Saturday but more importantly right throughout the season. Well done to the Management team led by Manager/ Coach Mark O’Connor and supported by the astute Martin Carville, the passionate David Irwin, the hard grafter Dessie McAuley, and the senior players Fergal Malone and Aaron McNamara. #FaughsAbu.

Minor Girls: We have no confirmed fixtures for the Minor Girls at present so keep an eye on social media for any updates.

County Final: The Greenhill’s County Senior Football Final has been fixed for St.Marys Park on Sunday October 2nd. The day will kick off with the Minor Football Championship Division 1 Final at 2pm when Corduff take on Aughnamullen while the Senior Final see defending champions Scotstown taking on Clontibret at 4pm. We are currently working through the plan for the day at the moment but we will require a large crowd of stewards, if you are available can you let Melissa Conlon know either by phone 087 761 7216 or by email @ secretary.castleblayney.monaghan@gaa.ie.