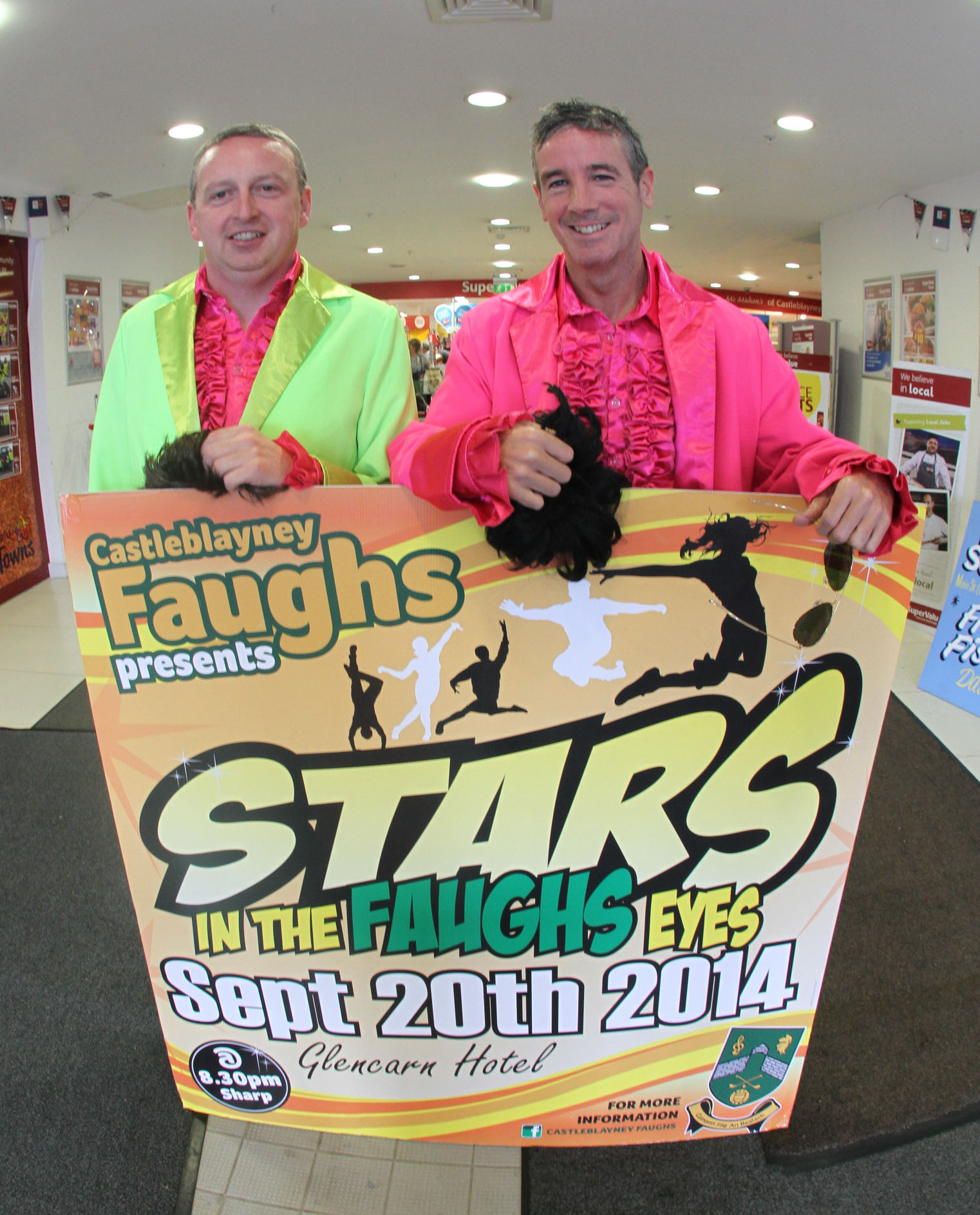 All roads will lead to the Glencarn Hotel this Saturday nightfor an un-missable night of craic as the Castleblayney Faughs host, Stars in the Faughs Eyes. The pressure has been ramped up a bit over the last week with the numerous acts polishing up on their routines and performances. A lot of secrecy has surrounded some of the performances with behind closed door rehearsals been reported from a number of sources. It seems that the earlier mood of “it’s good to take part” has descended into rivalry among the acts and the eyes are firmly set on the prize! Competition can only be healthy!
While some acts are pulling out the stops to ensure that no prying eyes come upon their rehearsals, one pair of performers took the opposition approach and where quite evident round the town on Saturday last for all to see as they strutted their stuff in various locals in the town. And by all accounts they were hard to miss in their bright coloured suits.
All in all, it promises to be a great night’s entertainment with plenty of laughs, good fun and some might even surprise us with their hidden talents. In all, there will be 15 acts in total with a mixture of live performances and mime acts. We will see a wide range of talents – singing, dancing, rapping, and acting – across a wide genre of music.
Acts will include Joe and Fred Bishop; Frank McDonnell & Stephen Dignam; Marc Loughmans Fitness4life; Fiona Irwin & Grainne Miller OPTFM; Glenn Murphy and Michael Carroll; John O’Brien & Ray McArdle; Paddy Conlon and his all-stars; Muckno Mania; Grainne Maguire, Declan Loughman and friends; Brendan McElroy; Eamon McMahon; Joe & Ciaran Hanratty; Brendan McMahon; Jim McHugh, David Connolly and Sandra Clarke; Tara and Jack McAuley.
What these acts need now after the hard work and effort they have put in, is your support. So please make a big effort to get to the Glencarn on the night and support your friends, teammates and fellow townsfolk. You will not be disappointed!
In addition, the audience will be also be treated to two performances from FUSION, a local youth dance and singing troupe, who have put on some brilliant performances in the past and have been busy at work in preparation for the night.
It promises to be a brilliant night of entertainment with plenty of laughs and plenty to entertain those in attendance. Tickets are selling fast and are available from McMahons Supervalu, Declan Loughman Sports, The Glencarn Hotel and from any Faughs committee person/coach/player. We’d ask as many people support the night as possible in what is the clubs main fundraiser for the year and will support the clubs ongoing development. The show starts at 8.30 sharp with doors open from 7.45 on the 20th September in the Glencarn. See you all there!