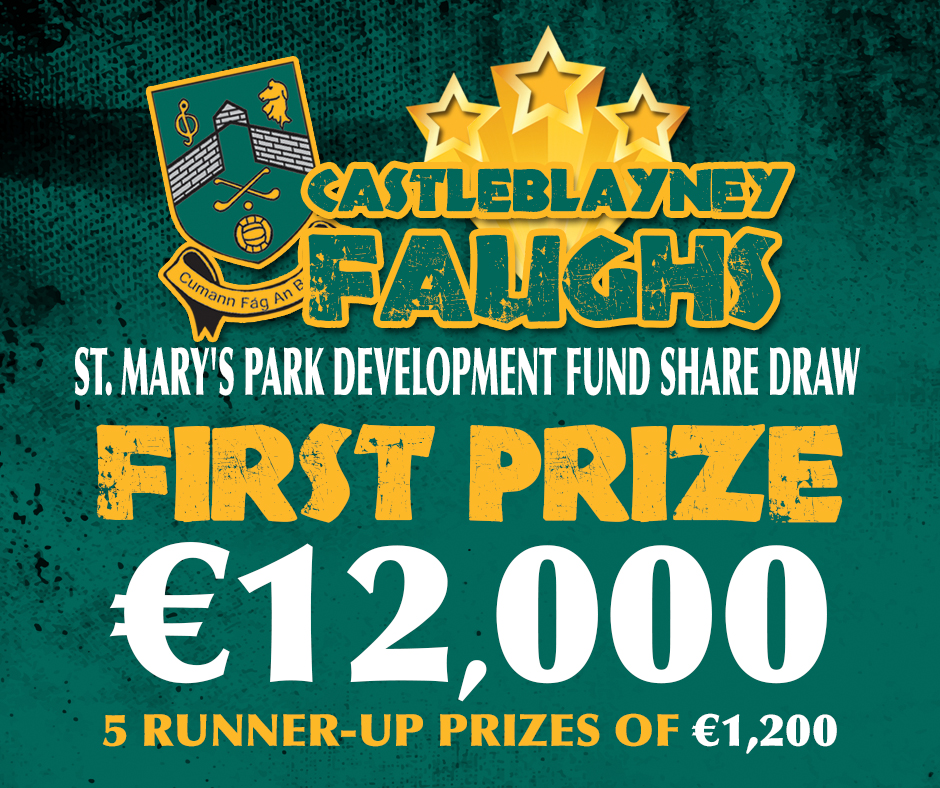 SFC Men: This weekend sees our senior men take to the field against Latton in the Senior Championship. The match is in Clontibret, throw-in 3.00pm and is the first of a double header with Truagh against Scotstown in the second match.

Please come out and support Colm and the lads as they continue their championship journey.

SFL Men: The seniors took to the field against Carrick on Sunday past in the penultimate league game. In decent conditions this was a good workout for the championship game coming up against Latton. In an entertaining first half, the sides were pretty even and this was reflected in the half time score, Faughs 1-06, Carrick 0-10, with the major being a well worked goal for the home side. In the second half Carrick proved just a little too much for us with a final score 1-10 to 1-17 in favour of the visitors.

U16 Girls: This Wednesday sees the meeting of Castleblayney and Donaghmoyne again in the Championship Final. After last week’s match which saw determination and skill see Blayney win the League, these teams go at it again. It promises to be the usual toughly fought match where pride in the jersey and club will go me to the fore. With nothing between the teams it’s anyone’s game Donaghmoyne looking revenge for last week’s defeat and Blayney looking to do their first Double.
Venue for this match is Inniskeen with throw on at 6.45pm … please come out to support them
The best of luck girls and management. The minors have a home game this Friday evening also at 6.30

Boys U15: Donaghmoyne was the venue on Thursday evening for what turned out to be a classic and nail biting encounter between Faugh’s U15s and Carrickmacross in the championship semifinal. The two teams had played at the same pitch over the summer and on that occasion the Faugh’s came out on top to be duly crowned league champions. Revenge was certainly on Carrickmacross’ mind as they made a blistering start to the match. Some fine saves by Brandon McCague kept the Faughs in the game at this stage. We rallied well and finally settled to play some nice football going in at halftime only a point down and looking forward to playing with a fairly advantageous wind in the second half. A poor start to the second half however saw this gutsy team fall behind by 6 points. This team are defined by their heart and determination and they went on to claw their way back into the game with goals from Martin Joyce and Niall Rice. Periods of dominance from the boys did not always translate into scores however as the woodwork was to be our enemy on 2 occasions. An equalising point from Kealan McMahon on the stroke of full time resulted in the match being extended into extra time. Playing with the wind the Faughs managed to accrue a 3 point lead at the end of first period. A goal from Carrick with 2 minutes to play of the second period was to be the fatal score that prevented these talented lads from achieving a potential double. All supporters there were treated to a fantastic match between two very evenly matched teams. Blayney left everything on the pitch in search for the win but just came up a little short. The management would like to thank all the squad for a superb year and for their commitment and dedication that they demonstrated in every match.

U12 girls: With the season coming close to an end the U12 girls play at home me this Thursday evening at 6.30 against Carrickmacross in the Semi Final. As a place in the final beckons we wish them and the management all the very best of luck. Please come out and support them. Good luck also to the dual players as the u12 camogie girls play in their final on Saturday in the Louth league

Well done: Congratulations to the U16 Girls who captured the League title against old rivals Donaghmoyne recently. Lets hope they make it the double as they are up against the same opposition in the Championship final this coming Wednesday (11th September) in Inniskeen @ 6.45pm.

Well done to Cooper McMahon and Alex McGinnity who picked up man of the match awards against Scotstown in the finals of the U11 Liam Stirrett League played recently in Scotstown. With great performances all over the field in both matches it was a hard choice to pick out anyone in particular, but both Cooper and Alex just pipped a lot of other players. Well done lads! Well Done to Sean McDonald, the recent winner in draw for the All-Ireland tickets. We have another draw happening very shortly for tickets to the replay… Remember if you are not in you can’t win! Well done to the hurlers and the dual players in particular who were victorious in the U17 hurling championship final against a good Carrick side.

Faughs Share Draw: As part of the launch of our Faughs Share Draw with a chance to win €12,000 top prize, we will be holding an Information Night in Iontas on Tuesday evening (17th September) @ 7.30pm. Everybody is very welcome to attend as it will be a great opportunity to find out more about the the plans for the development of our second playing pitch and to maybe help out wherever possible.