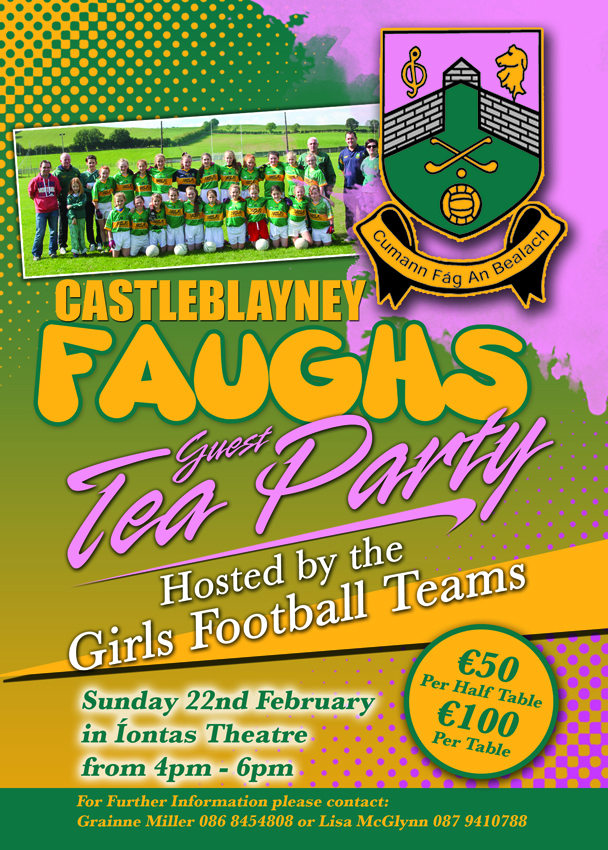 The Big Match – Sunday proved to be yet another great milestone in the Clubs development, as we welcomed back the Monaghan Senior Team to competitive senior football in Castleblayney for the first time in nine years. The planning and preparation work under taken by everyone over that last few weeks really paid dividends as over 6,000 people entered into the park at their ease shortly before 2pm. All the work put in by a large amount of people last week insured that St.Marys Park looked in great condition for players, management, supporters, officials and press. The only thing that didn’t go our way was the final result which saw Monaghan lose by a single point after a very exciting game. The next game in St.Marys Park is on Sunday 22nd of February when Monaghan take on Roscommon in the Allianz Hurling League Division 3A at 2pm.

Juvenile Presentation – The Juvenile presentation took place last Saturday evening in the Glencarn Hotel, with County Goal Keeper Rory Beggan presenting the medals to all our teams. A crowd of over two hundred packed into the Castle Suite and they listen intently as Rory, Dermot Malone and Martin Mc Elroy held a question and answers session with the Clubs Youth Officer Brian Sherry. The lads all outlined the importance of practicing at home with each of them explaining that skill development can only be enhanced by taking a ball outside in the evening and working on the basic skills of kicking left and right as well as catching and fist passing. Dermot outlined some dietary advice particularly to the Under 14 to Minor age group. A big thank you to all the players, parents, coaches and club members for making the evening so memorable.

Juvenile Training – We really got back into full swing last week with huge numbers attending training. Monday night saw the Girls return to the Astro turf with the U8 to U12 girls training at 7pm -8pm, while the U14 to Minors started at 8pm -9pm. On Wednesday night the U14 squad got back together at 7-8pm on the Astro turf while Thursday night saw an invasion of boys and girls U6’s in Rath Na nOg from 6pm–7pm, U8 Boys were on the Astro Turf from 6pm–7pm while the U10’s Boys trained from 7pm-8pm. Finally the Under 12 team returned to training on February 10th (Tuesday) again on the astro turf from 7pm-8pm. We are delighted to see new faces and we would ask parents to encourage all children in the local community to attend, not alone will the children develop some fundamental movements and GAA skills but more importantly they will have fun in a very friendly, safe environment.
Under 10 Fun Fives – The U10 team travelled to Ballybay Community College for an indoor blitz last Saturday morning, the two teams put in a great display of football for the ninety minutes. The Boys showed great skill and decision making as they progressed during the morning. We travel to the same venue next Saturday morning leaving at 9am from St.Marys Park and return shortly before 12pm.

Guest Tea – The up take on our Girls Guest tea is starting to gain really momentum with a quite a number of tables already sold. We are asking all Club members to book Sunday 22nd of February into their Diaries for the Juvenile Girls teams Guest Tea in Iontas from 4pm to 6pm. Grainne Miller and her team are currently hard at work pulling together the details of the evening, this will be a real social event and great way to catch up with both friends and family. If you want to purchase a table or half a table please contact Grainne on 086 8454508 or Lisa Mc Glynn on 087 9410788.

Coaching Programmes – The Monaghan Coaching and Game Development team have pulled together an excellent programme of training courses for the month of March. These workshops are FREE OF CHARGE and can be a great resource for coaches in terms of their continued development as a GAA coach. The topics covered are “ Coaching attacking play” which takes place in Tyholland on Monday 2nd of March at 7.30pm, “Performance Analysis” in Cloghan on Wednesday 11th of March at 7.30pm, “Goal Keeping Workshop” on Monday the 16th of Match at 7.30pm in Cloghan and “Coaching defensive play” in Drumhowan at 7.30pm. Finally the annual O’Neill’s Ulster GAA Coaching & Games Development Conference is scheduled to take place on Saturday 21st February 2015 at the Glenavon House Hotel. The theme of this year’s conference will be ‘Skill Acquisition – Improving Performance’ and will focus on the key skills of kicking and striking. Can you please confirm your attendance for these courses with Brian Sherry on 086–2334287 before the end of January.
Well done – This week’s well done goes to all of you for your effort and commitment shown over the last few weeks to make sure that we put St.Marys Park back on the map as an intercounty ground. Without all your efforts an event such as last Sunday couldn’t take place, so well done to everyone who helped in any small way.

Lotto – There was no Winner of the Jackpot at this week’s lotto draw. Numbers drawn 06 09 21 22. Winners of the lucky dips of €50, Cormac McNally, Aisling Grove & Stevie Lynch, Drumillard. Next Week’s Jackpot is €7000 & the draw takes place in the Horseman’s. Good Luck Everyone.