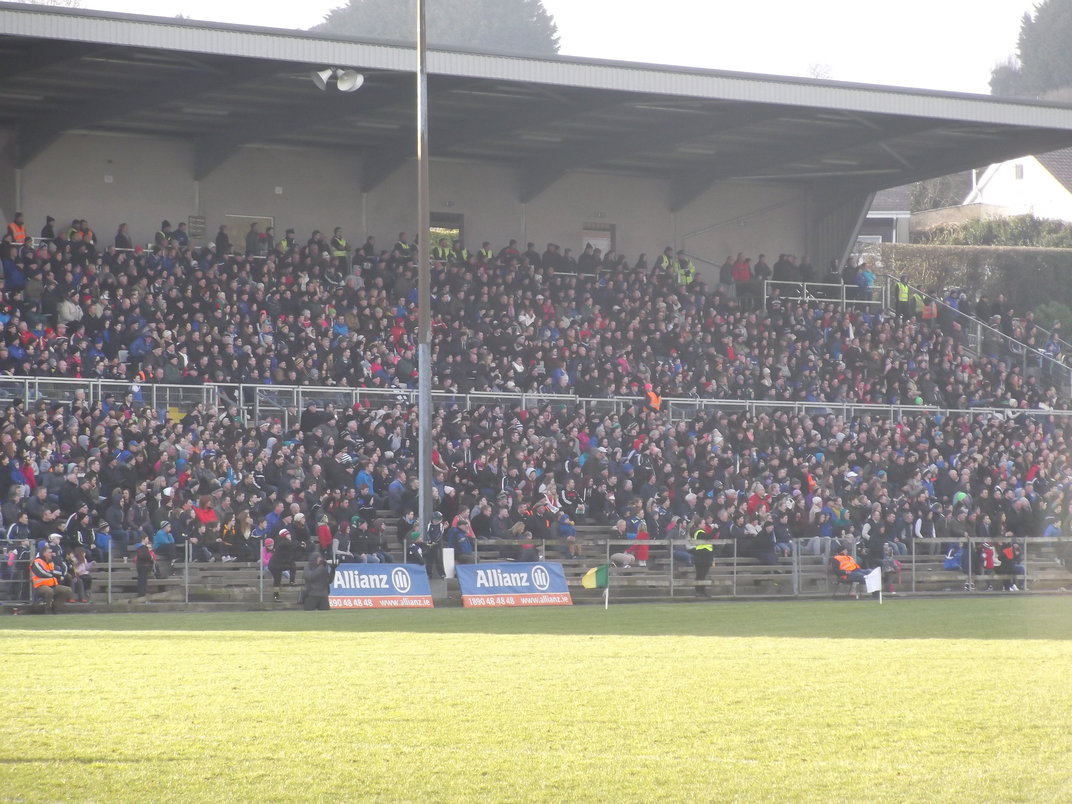 Last Sunday the people of Castleblayney awoke to a cold foggy morning, with a blank of fog lying over the hills of the town, as the fog slowly lifted in St.Marys Park it revealed the huge amount of work that had been undertaken in the preceding weeks by the Faughs Club in preparation for the Monaghan Senior Team’s return to competitive football in Castleblayney for the Allianz Division 1 game versus Cork. The new 2,100 covered seater stand along with the remaining 4,000 seat were sparkling, the new “Croke Park” size prunty pitch was in immaculate condition and the view from the upgraded media centre was extremely impressive. The re-development of St.Marys Park has been under way for a couple of years and as with any new project there was a sense of nervousness and excitement among the Club membership as they hoped that the Club would be ready for their big day. It was clear from early on that a very large crowd would turn up to see Monaghan take on their Southern counterparts in a battle to see who would go top of Division 1, when Finbarr Kelly the referee from Longford throw in the ball at 2pm well over 5,000 patrons had entered seamlessly into the Ground. A very exciting match which swapped one way then another lead to a great atmosphere within the ground and when Kieran Hughes found the back of the Cork net with a brilliant goal the roar could clearly been heard on town’s main street, unfortunately for all the Monaghan GAA patrons they left disappointed as a last minute free to equalise the match from the very impressive Conor Mc Manus just sailed wide of the post.
A delighted Senior Chairperson Stephen Dignam was delighted with the overall work by everyone involved “Days like to today make all the effort worthwhile. There has been some great work undertaken over the last few weeks between the County Board executive and our own Club, collectively we have pulled out all the stops to insure that today was a real success. The goodwill that people have shown towards the Club in the last few weeks has been humbling. Our own members have given up hours of their own free time to make sure we were ready for today, people have given us their facilities for parking and we had over eighty people giving up their Sunday to help us steward the event. One of the most pleasing aspects has been the positive feedback from so many; both sets of supporters, the media, the officials and most importantly the people from our own town”. Stephen continued “I would like as Club Chairperson to thank everyone involved. It really is a big team effort and today, together, we have re-established St.Marys Park as a venue for big games. The only disappointing aspect from toady was the result but I have no doubt that Monaghan will bounce back over the next few weeks to secure the necessary points to stay in Division 1”.