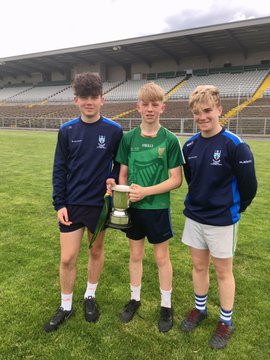 U15 Boys:Our U15s carried off a fantastic win last Wednesday evening in Donaghmoyne.

They ran out 9 points the better of a physically opposing Carrickmacross team in the Manor Farm Division 1 Cup Final. This group of boys have proven themselves to be an exceptional team over the course of the 11 games played, to reach the pinnacle of Monaghan U15 football. Their style of play has earned lots of plaudits this year and rightly so as it is based around constant support play and all out attack. They were a joy to watch again in the final particularly in a very strong second half showing where the boys managed to gain a lot of possession from the Carrick kick out. Goals from Kealan McMahon and Thomas Hughes allied with numerous high quality points from Niall Rice allowed captain Ben Mallon lift the cup in front of his joyous team. Their focus will now be on The forthcoming Championship which commences on the 8th August. The management would like to thank all those who turned out to witness the boys’ victory and they look forward to having the same support in the Championship.

U12 Girls
The next round of group matches started last Friday with a home game against Sean Mc Dermotts. This group of girls are improving with every game and and held off a fight back from Sean’s to finish winners by 5 points
Next match is this Friday away to O Neills
Training continues on Monday evenings.

U14 Girls
Our u14 girls have progressed to the semi final against Carrickmacross. This is an away match next tues evening please come out and support the girls in their effect to make it to another u14 final.
Training continues Friday and Monday evenings.

U16 Girls
A great match was played last week against near neighbours O Neill Shamrocks. As always both teams gave it there all in a close contest which saw the Blayney girls win by the narrowest of margins of one point. Next match for this team is 18th August.
Training continues Monday and Friday evening.

St. Mary’s Park Development:
Player participation is at an all time high in the history of the Faughs club seeing boys and girls from under six to senior levels using the playing facilities at St. Mary’s Park for training and matches. This has prompted the club executive under chairperson Mac Malone to turn its attention to the next phase of their development plan. This phase will see the building of a new playing field and running track at Onomy on the site of the former Castleblayney Golf Club adjacent to the current playing fields. The development will also incorporate a plan for the future development of 4 new dressing rooms with showers, two referees rooms, storage area for equipment, a gym facility as well as a social space for club members.

Well Done: Congratulations to our dual players who represented themselves in the county camogie final last Sunday and the win over Clontibret. Well done to everyone involved and best wishes as you progress in The Ulster Competition.
Congratulations to the U11 boys who travelled to Truagh on Saturday past to take part in their annual blitz. The lads put in a great shift and won 4 out of 5 games (drawing the other) to make it through to the final against a talented Emyvale side. In the final the boys gave it everything they got, but after going to extra-time in the S/F energy levels were down a bit and Emyvale came out on top, scraping through by a point. The boys now have a league match against Killeevan side this coming Wednesday.

Congratulations to Sarah Wilson who represents herself and the club on the County Minor Team as they have made it to the All Ireland Final
Well done to everyone involved.

Summer Camp: Its that time of the year again….. the most exciting few days of the Summer, The McMahons Faughs Summer Camp takes place from 7-10th August, with the only requirement is for everyone to have FUN, thats as much FUN as is physically possible. We ask you register as soon as possible to secure place and to allow us to plan out the the Camp.
Forms available online at https://bit.ly/2OnA2J5 or instore at McMahons Supervalu and can be left for Melissa’s attention. We will also have a pre registration night on Thursday 1st August at Press Room at Football Field, from 5.30-7pm.
So what are you waiting for, get registering………….