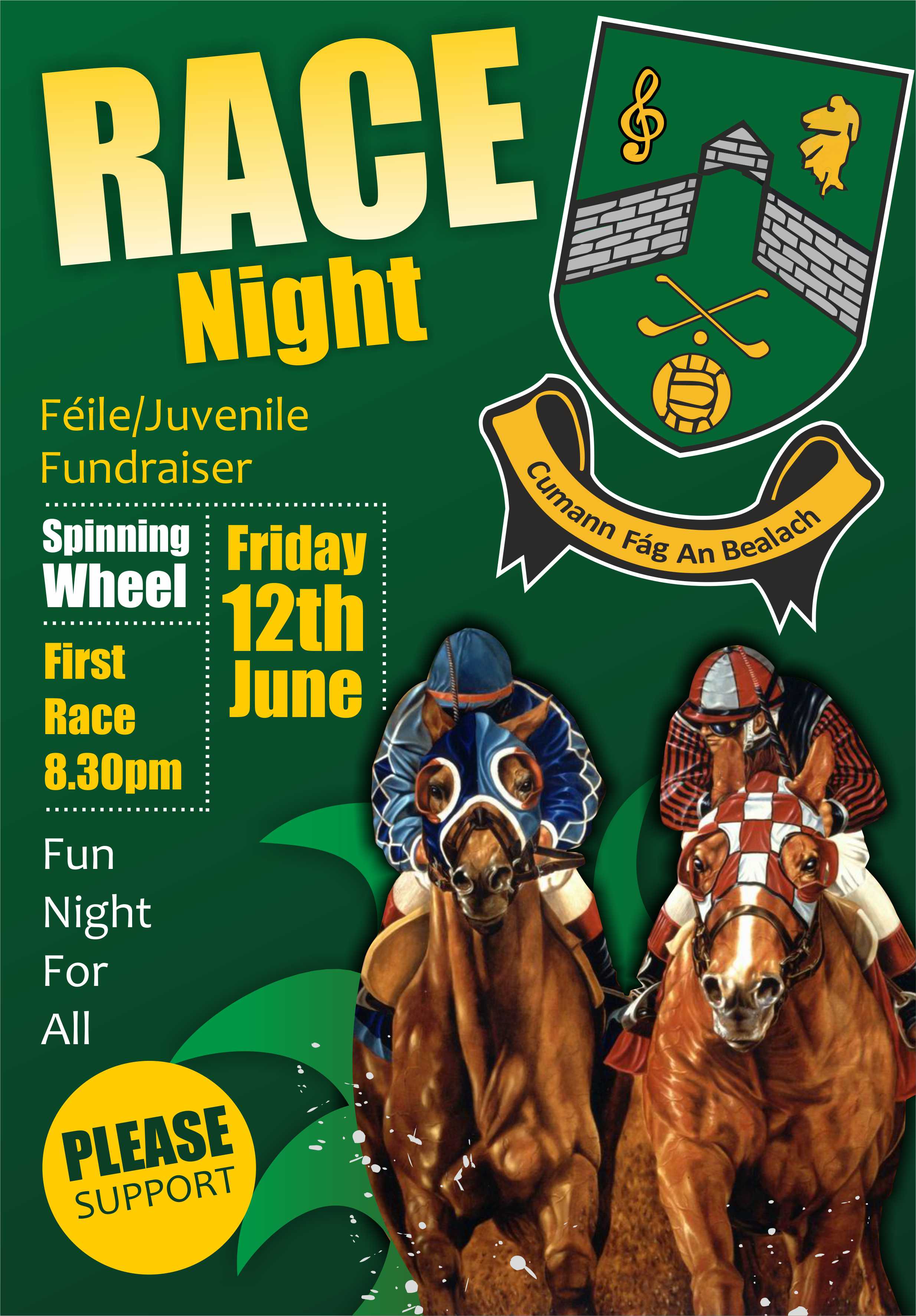 Senior Team:  The Senior Team entertained Truagh last Wednesday night at home in St.Marys Park, the Faughs didn’t make use of the aid of a strong breeze and trailed at half time by one point. Truagh came out in the second half and knocked over eight unanswered points which killed off the game, we now have two very difficult away ties coming up, the first is this Wednesday night when we travel to Scotstown for an 8 pm throw in, while on Saturday evening we play Clontibret with a 7.30pm throw in.

Reserve Team: Wednesday the 10th of June see the Reserve Team continue their league campaign with a home game against Emyvale at 7 pm in St.Marys Park, the team currently sit on top of the table mid-way through the fixtures hopefully they can get two more points on Wednesday.

Boys Under 8: The Boys travelled to Scotstown last Saturday for four challenge games against the Blues , all teams competed very well and we have no doubt that these group of boys will be playing each other regularly for the next decade or so. Thanks to Scotstown for organising and to County Stars Rory Began and Shane Carey for refereeing the Under 8 Games. Training will continue on Thursday night and Saturday morning in the field, please remember to take water, boots and your gum shield.

Boys Under 10: The Boys also travelled to Scotstown on Saturday morning were they fielded two teams, both groups competed well. Thanks to County Stars Kieran Hughes and Darren Hughes for referring both these games and for the questions & answers sessions that they had with both players and coaches after the games. This Saturday the boys have an All County Go Games Session in Cloghan with an early start time of 9.30pm, we will gather at St Mary’s Park at 8.30 am, this set of Go Games will take the format of three games in round robin and then the teams will be split out into a Shield or a Cup side of the draw. Can we ask that all the boys come with gum shields, the forecast for Saturday is to be warm so can you make sure your son has plenty of water with them.

Boys Under 12: The Under 12 teams travelled to Carrick last Saturday to play the Emmett’s. The development team were up first and were slow out of the blocks with Carrick having the upper hand for most of the first half as they led by seven points at one stage. The young Faughs team started to up their game after half time and kept chipping away at the Carrick lead and when Niall Rice found the back of the net the Faughs had their noses in front, a lead which they never surrendered. Best on the day for the Faughs were Ben Mallon, Martin Joyce, Ross Maguire and Kevin Flanagan. Next up was the Senior team, playing with the breeze in the first half we struggled to get the accuracy in front of goals and went in one behind at half time but as with many Faughs team playing against the breeze allows the clubs running game to come to the fore. Some excellent patches of play and some great finishing saw the Faughs emerge victorious by seven points. Best on the day were Joe Carey, Paudie Heavin, Thomas Hughes, Jodie McQuillan and Conor Ruddy. Next up for the two under twelve teams is a home game against Emyvale on Saturday 13th of June.

Community Games Girls Under 12: Last Thursday the Girls travelled to Emyvale to play Donagh Parish (Emyvale and Truagh) in their final league game of this year’s Community Games competition, the girls competed very well but three goals from the Donagh team in as many minutes mid-way through the second half saw them advance to the Semi Final. Well done to the team and managers on their overall performance in this competition.

Boys Under 14: The Under 14 development team played Sean’s Tuesday night in the field, with a big improvement in the overall team performance they played some very good football throughout and were unlucky not to get anything out of the game. This Saturday see the senior team play a home match against Latton in St.Marys Park with a throw in time of 12pm; this is then followed by a Development team fixture away to Tyholland at 1.15pm.

Girls Under 14: The Girls were due to travel to Killeevan on Monday last the 1st June 2015 however the game was postponed due to the weather conditions and was re-scheduled for Friday the 5th June 2015 at 6.45 p.m. The Girls will then transfer to Inniskeen on Monday the 8th of June  at 6.45pm for their round seven fixture.

Boys Under 16: The lads are now on the exam break up until the 2nd of July, Tom and Eoghan will be in touch with all training details.

Feile Street Collection: Well done to the Under 14 squad, their coaches and their parents who helped organised last week’s fundraiser is support of the Feile squad. Right from early morning people were out collecting either rubbish or litter right across the town, thank you to so many people form the public who donated generously to the street collection and well done to the boys for collecting a mountain of rubbish on the day.

Race Night 12th June 2015:  Time is fast approaching, as we start the count down to the clubs big race night. We are looking for everyone to get involved on the night so when some of the young lads come up to and ask you to but a horse or sponsor a race we hope that you will look kindly on their request. The Race night itself will be held in the Spinning Wheel on Friday the 12th June 2015 at 8.30p.m.  This will be a guaranteed night of fun and craic and we are asking for the support of everyone within the Club to make sure that this event will be a great success. The cost to purchase a horse on the night is €10.00 and to sponsor a race for the night is €50.00 so we hope that you will all invest in a horse or two before the big night!!  Remember all the money raised goes to support the players of tomorrow.  So let’s get it into the Diary for a good nights craic.

Registration Day: Saturday the 13th of June sees the Castleblayney Faughs hold their annual Club registration day in St.Marys Park. The registration day will commence at 9am in the morning and will continue right up to 3pm, leaving Club members the opportunity to pay their membership. Last year this day proved to be a great success with lots of people availing of the opportunity to pay their annual membership. Membership must be paid by everyone within the club from player, to coach, to committee members to social member, we will also be collecting any outstanding Cairde Memberships due for 2014. Membership is essential for every player, coach, member as this is what covers insurance with the GAA. Our membership rates are great value with Family Membership costing €30, an Adult membership costing €20 while an Juvenile Under 18 costs €10, we hope to see lots of members coming out on Saturday the 13th.

Well done: This week proved to be another historical week in the Clubs efforts to develop ladies football within in the town, when the Castleblayney Girls School in their first year of competition managed  to captured the Girls Division 1 Cumann na mBunscol title. In what was a pulsating match the girls emerge one point winners over Gaelscoil Ultain Monaghan, well done to all the Girls who play for both the Club and the school, well done to all the teachers for their encouragement to the Girls and finally well done to all the coaches  who are working so hard to get ladies football off the ground, another step has now been achieved so well done. Hard luck also to the Boys National Schools how were defeated by four points in the final of the Hurling Division One final against Monaghan.