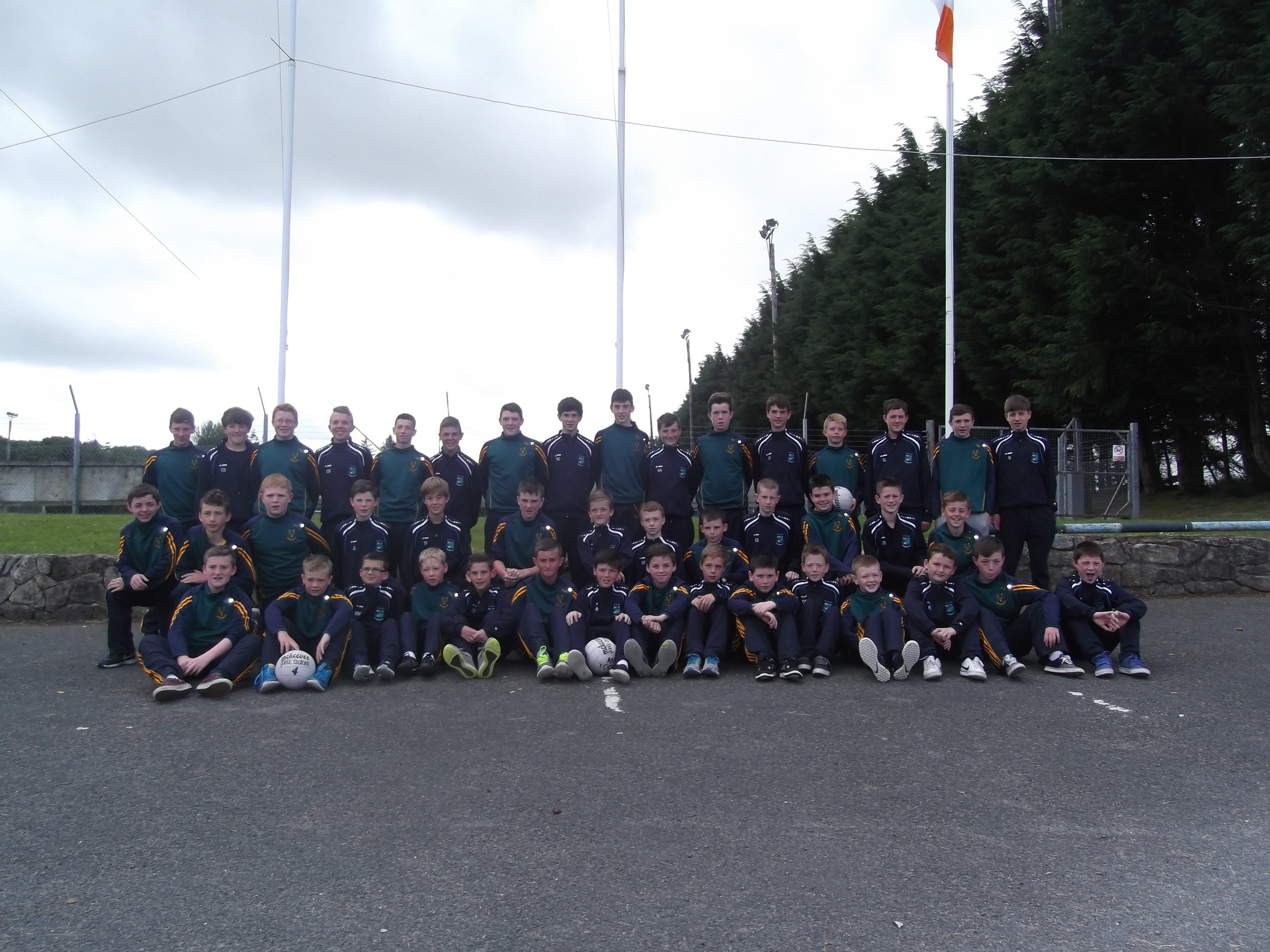 Senior Team: The Senior Team had a very useful win against Clontibret last Sunday in St Mary’s Park, the Faughs started brightly with Ciaran Hanratty and Dermot Malone showing the quality with some excellent finishing which included tow Hanratty goals in the first twenty minutes, when Patrick Tavey finished for the Faughs third goal on twenty five minutes it gave us a good half time lead of 3-5 to 0-4. The second half saw Conor McManus score a penalty to give some hope to the O’Neills but the game was killed off when Martin McElroy found the net for the Faughs fourth goal of the game. Final Score Faughs 4-10 Clontibret 2-7, the result now leaves us on nine points, we play Monaghan Harps in a Star game in St Mary’s Park on Sunday 12th of July.

Reserve Team: The reserve team have a home game this Sunday when they entertain Aughnamullen at 2pm, the boys currently are top of the table on fourteen points.

Boys Under 12: The Senior Under 12 team played Magheracloone last Thursday evening in the field, unfortunately they suffered their first defeat of the season, the final league game of the season will be an away trip to Monaghan Harps. The development team entertained Scotstown last Saturday morning and had a very good win, this team is also developing well and currently sit top of their group entering the last round of the league when the too also travel to Monaghan Harps on Saturday 11th of July.

Boys Under 14: The boys got their weekend off to a great start when they development team defeated Corduff in the league last Thursday evening, there were plenty of smiles as the Boys got their Feile Gear directly after the match. On Friday morning the Boys travelled to Wicklow for Feile Peil na Nog, the team and coaches head off early and after a lengthy bus trip, they arrived in Ferns Co Wexford at around 3.30 pm. The first game up was against the home club Ferns, the match proved a difficult opener with nerves playing there part but a couple of goals from Joshua Mone early in the second half secured the opening two points. Next up were South London Gales who had won the competition for the last two years, they were a massive team fielding a team with a number of their players over six foot tall, the Faughs got off to a slow start in this game but slowly but surely they got back into the game and went in at half time a couple of points up, playing into the breeze in the second half the boys really demonstrated how good they were, tackling every London player as if their lives depended on it, once they got the ball back they used they superior skills to keep the ball away from the London team before they picked off a couple of great scores, when the referee blow the whistle seven minutes into injury time the Faughs had won by two points. This game will live in everyone’s memory for a long time the battling qualities shown by the team were fantastic and arguer well for the future. The team then travelled to An Tochar Roundwood in Wicklow who were our host club for the weekend, the boys headed off to all their host families for the evening. Saturday morning saw the boys take on An Tochar in Roundwood at 11am, the boys played really well in the game and moved the ball at pace right from the start which resulted in a couple of early goals, the boys maintained that advantage right throughout the game, when the referee blow for full time the boys were seven points ahead. At this stage we had qualified top of the table with three wins out of three and we headed off to the Wicklow GAA Centre of Excellence in Rathdrum for our quarter final against Cavan Gaels. The first half we played against a strong breeze and when Cavan stuck the ball in the back of the net from the throw in we thought we were going to be in trouble but yet again the boys dug really deep and played some great possession football running the ball at their much more physical opponents, at half time there was only a point between the sides. Everyone felt entering the second half that we would push on and win the game but despite the boys best efforts we just could seem to find our rhythm and two goals by the Gaels in the last minute of the game saw us suffer defeat by seven points for the first time in the competition and so ended our Feile Journey. Saturday evening saw our host An Tochar put on a great BBQ for all the players, coaches, officials and parents, there was a presentation from Stephen Dignam to An Tochar from the Faughs Club in which Stephen thanked them for the fantastic reception that they had given our Club over the weekend, indeed An Tochar had a brilliant weekend themselves winning the Shield Competition in our Division which was a fantastic achievement. Well done to everyone involved , the boys were an absolute credit to their families, club, town and county, they showed how they could play and were the most skilful of all the team we played. Thank you also to the management team who put in an enormous effort into the preparation of the team for the weekend the amount of work they have put into getting the boys ready for the weekend was fantastic. Also thank you to the huge crowd of parents and supporters who travelled for the weekend they help make sure that the atmosphere at the games was always electric. Finally a massive thanks to An Tochar our host club who rolled out the red carpet for each and every one from the Faughs Club, we would like in particular to mention Carol Curley their Feile Coordinator who put in such a huge effort in advance of the weekend right through until the boys got back on the bus to head home. Feile is an event that makes life long memories and this Feile definitely lived up to that, no doubt we will still be talking about those games twenty years down the road. Well done to everyone.

Its back to business this Saturday when we play Carrick in our Division 1 league game at home in St.Marys Park, throw in time 12pm.

Minor Girls: The Minor girls had their first competitive outing of the season away to Doohamlet last Saturday evening. In what was a tightly contested affair, the Faughs girls were narrowly beaten by a single point. The girls put in an excellent display of skill, determination and some very good finishing. Next up for the Minor Girls is a home game against Corduff on Thursday July 30th .

U16 Girls: The U16 Girls also travelled to Doohamlet on Monday evening, once again Doohamlet emerged with the win.

Cul Camp: This year’s camp will take place in Castleblayney on Monday 6th of July and run until Friday the 10th. Application forms have been sent out around all the local primary schools as well at Juvenile training .For an enquiries please contact Brian Sherry on 086 2334287 or County Coaching Development Officer Colin Malone on 086 3515950 or Developmentofficer2.monaghan@gaa.ie

Clean Up Day: In an effort to keep the Club grounds in good condition we are looking at holding a clean-up day in the football field, what we are looking to do is fix , wash and cut the area around the Juvenile Field. We are hoping that people will volunteer their time for a couple of hours on Saturday 4th afternoon, you never know we might even look at throwing on the old BBQ if we get enough interested parties. If you are interested in helping out please give your name to either Brian Sherry, Melissa Conlon or any other Committee member.