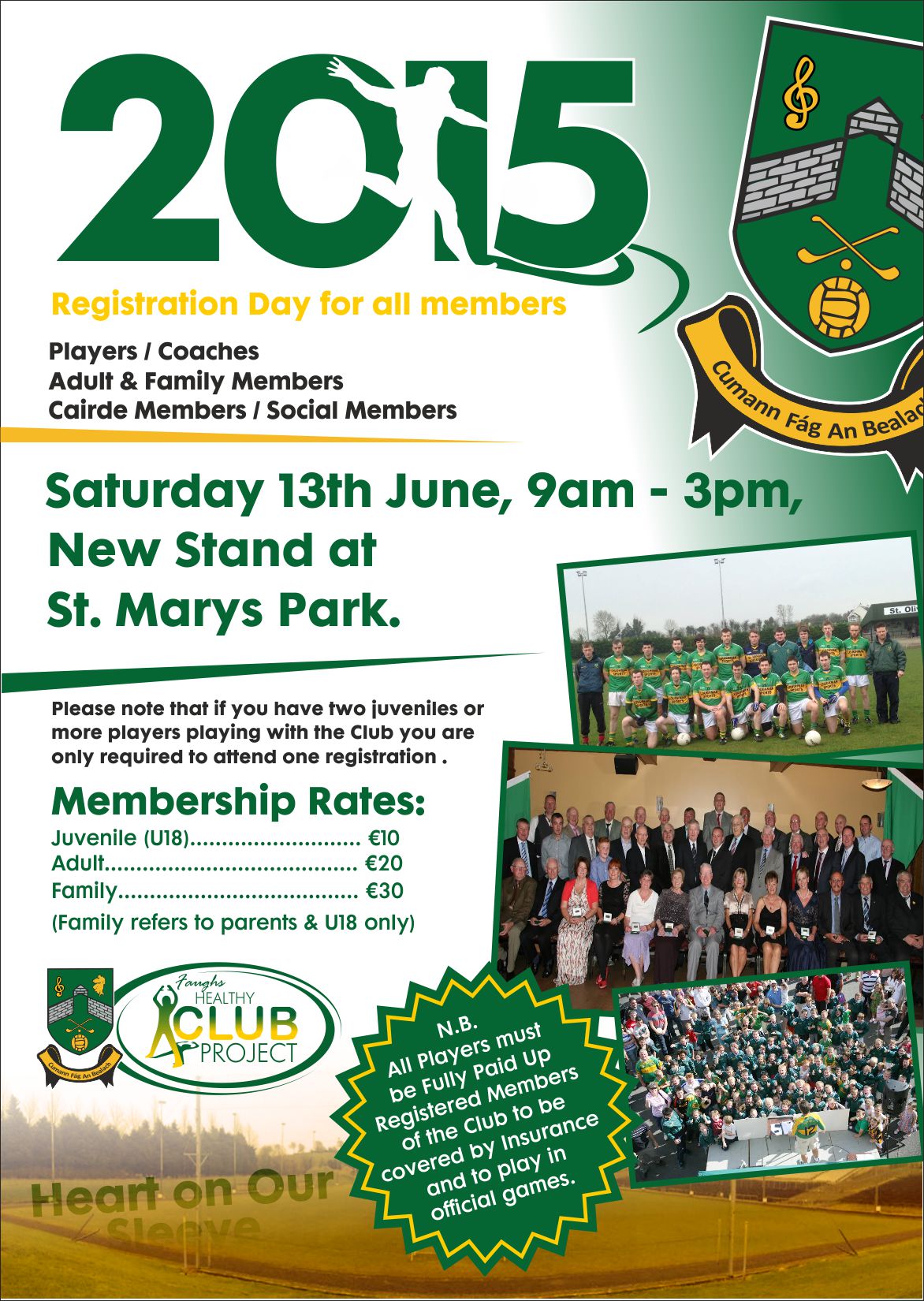 Race Night 12th June 2015: This Friday night sees everyone descending to the Spinning Wheel for the Juvenile Race Night. Thanks to everyone who has either bought a Horse or sponsored a race. MC on the night will be none other than our own Stephen Dignam, better known among the racing circles in Castleblayney as the John McCririck of Crescent Hill. We want to kick off at 8.30, so can we ask you all to attend on time for what no doubt will be a good evenings craic, thanks to Damien Hughes who has kindly agreed to sponsor the cost of the night plus supply some finger food. Remember all the money raised goes to support the players of tomorrow. So let’s get yourselves organised for a good nights craic.

Registration Day: On Saturday we will hold our annual registration day, this proved to be a great success last year with a high percentage of people paying their membership on the day .The registration evening will commence at 9am in the afternoon and will continue right up to 3pm, leaving Club members the opportunity to pay their membership. Membership must be paid by everyone within the club from player, to coach, to committee members to social member, we will also be collecting any outstanding Cairde Memberships due for 2014. We have recently seen the introduction of the new insurance scheme from Croke Park which will only cover fully paid up members of the Club, so it is in everyone’s interest to make sure that they are paid up members of their own GAA Club. Our membership rates are great value with Family Membership costing €30, an Adult membership costing €20 while an Juvenile Under 18 costs €10, we hope to see lots of members coming out on Saturday the 13th.

Senior Team: The Senior Team picked up two valuable points last Wednesday night when they travelled to top of the table Scotstown, the Green and Gold opened well against their old rivals with Martin Mc Elroy followed by Dermot Malone putting the Faughs three in front after fifteen minutes but Scotstown rallied and got back on level terms at five points apiece but just before half time a Patrick Tavey goal followed by another Malone point left us four in front. Half Time Score Scotstown 0-5 Faughs 1-6. The second half saw defenders Jim Mc Hugh and Mickey Gurn add to our advantage and when Barry Hanratty found the net ten minutes into the second half the Faughs were eight in front and never looked like surrendering their lead, Tavey, Malone and Greene kept the scoreboard tipping over and when Referee Anthony Tate blow the final whistle the Faughs were in front on a score line of Scotstown 0-12 Faughs 2-12. Saturday evening match against Clontibret was cancelled by the County Board so our next Senior League game is an away trip to Inniskeen on Sunday the 14th of June with a throw in time of 2pm.

Reserve Team: The reserve team played Emyvale last Wednesday the 10th of June in St.Marys Park at 7pm see Club Social Media for results, the next game for the lads is an away trip to Tyholland on Saturday June 20th in a round eight game, throw in time is 7pm.

Girls under 8 and Under 10: These young ladies travelled to Magheracloone last Friday evening to play for their first time for the Castleblayney Faughs; they did brilliantly considering that this was the first time to play as a team and showed their skill improvement right throughout the game. This is the first in a series of games which will be organised by the management over the summer, thanks to all the parents who travelled along on what was a bitterly cold June evening.

Boys Under 8: The Boys (Born in 2007) travel to Cloghan this Saturday for an All County Go Games session in Cloghan, the boys will need to leave early with assembly at St.Marys Park at 8.45 am for a 9.30 throw in, they should be back around 11.30 am. Can we ask as many of the parents to travel as possible and also please insure that they boys have water, boots and gum shield. Training will continue on Thursday evening in the field at 6pm.

Boys Under 10: The Boys travelled to Cloghan for the All County Go Games last Saturday, there was great excitement among all clubs as a huge group of under 10 turned up. We had two teams playing, a senior Under 10 team made up of actual ten year old who played in the Cup competition, they played in a group with Carrick, Ballybay and Aghabog and did very well winning two and losing one, while the Club entered a team in the shield competition made up of nine year olds who also did well winning two and losing one. Unfortunately the weather was the only winner on the day with one down pour after and another leading to the County Development team making the right decision to abandoning the Blitz but overall the club were happy with the boys performance on the day, while there is a good bit of work to be done with this group they are making very steady progress. Our next set of Go Games is on Thursday 18th of June, when we make the short trip to Donaghmoyne, the hosts and Drumhowan, Toome, Magheracloone. Training continues on Thursday at 7pm.

Boys Under 12: Saturday 13th of June see the under twelve Development and Senior Team entertain Emyvale in St.Marys Park, the Development team had a good win away to the same opposition in the Spring League while the Senior Team suffered a narrow defeat on the same afternoon. Best to luck to both teams if you are about please make sure that call out to the field to watch the next generation of Club players.

Girls Under 12: The Girls opened their League campaign with a very strong performance against a young Latton team, they played well right though out the match and some of their forward play was outstanding with the team racking up 4-15, mostly from open play. Training continues as normal this week.

Boys Under 14: The Under 14 Squad have hit a sticky patch at the moment with both teams suffering defeats on Saturday last, the development team travelled to Tyholland where they suffered a nine point defeat but by all accounts played some excellent football right throughout the match. The Senior Team had a home game against Latton in which they played some nice patches of football but entering the last five minutes they concede 1-2 to suffer a second straight defeat. The team now have a welcome break which hopefully they can use to get ready for Feile and the remainder of their league season, a season which now means every game is a championship match as they attempt to qualify for the Semi Finals of the Mason Cup.

Girls Under 14: The Girls had an away game to Killeevan on Friday last the 5th June. The girls started the match with great determination but unfortunately they failed to sustain that level of energy throughout against a very solid Killeevan team and deep into the second half it was apparent that the Killeevan team were stronger on the day. The Girls didn’t have long to recover from their defeat on Friday as they had to travel to Inniskeen on Monday the 8th June 2015 for their round seven fixture. The Girls got off to a great start scoring some fantastic points and they kept the momentum going throughout the game. The overall team effort was superb and the glorious weather helped us all enjoy a great afternoon of football. The girls scored a combined 7-15 on the night which ensured them a very well deserved win. Our next match is a home game against Eire Og on Monday the 15th June 2015 at 6.45 p.m. All support would be greatly appreciated.

Boys Under 16: The lads are now on the exam break up until the 2nd of July, Tom and Eoghan will be in touch with all training details.

Cul Camp: With the summer holidays just around the corner this only means one thing, the Kellogg’s Cúl Camps are back in town. The camp will take place in Castleblayney on Monday 6th of July and run until Friday the 10th. Application forms are been sent out around all the local primary schools as well at Juvenile training. For an enquiries please contact County Coaching Development Officer Paul O Connor on 086 837 4827 or developmentmanager.monaghan@gaa.ie.

Clean Up Day: In an effort to keep the Club grounds in good condition we are looking at holding a clean-up day in the football field. What we are looking to do is fix, wash and cut the area around the Juvenile Field, we are hoping that people will volunteer their time for a couple of hours on Saturday 4th afternoon, you never know we might even look at throwing on the old BBQ if we get enough interested parties. If you are interested in helping out please give your name to either Brian Sherry, Melissa Conlon or any other Committee member.