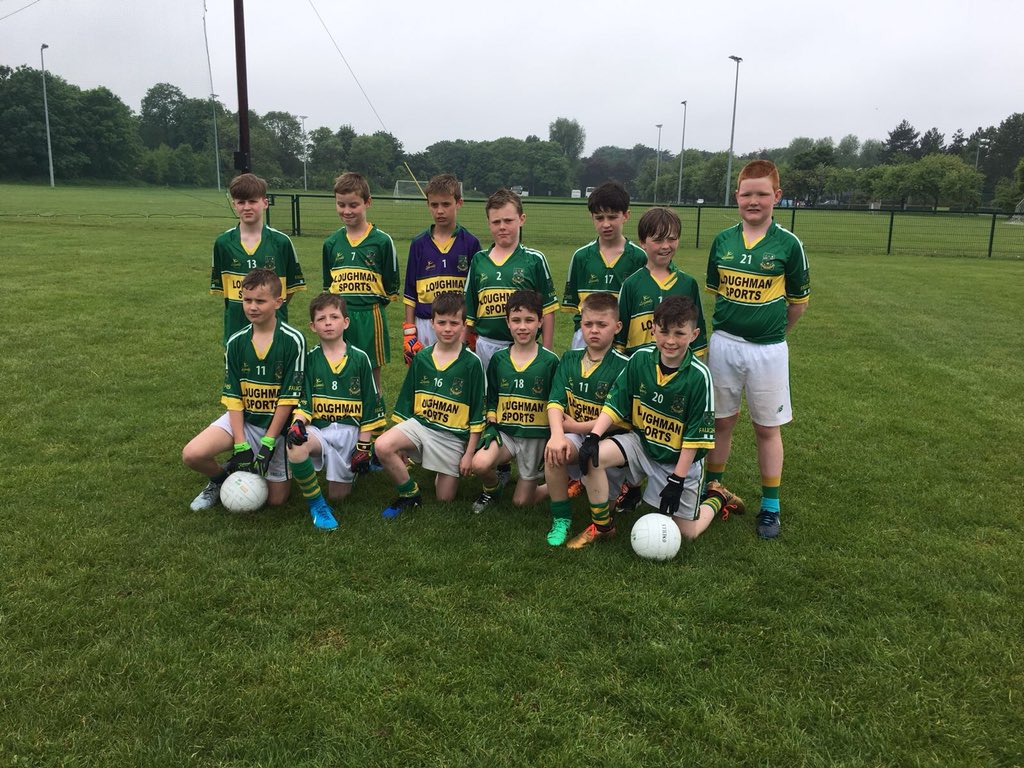 U10 Boys: The Under 10 Boys travelled to Kilmacud Crokes on Sunday past for their annual blitz. The Faughs were drawn in a group with Kilmacud Crokes,
An Cheathrú Rua(An Gaillimh) and St Colmcilles (Meath).The young Blayney lads showed great skill and desire to emerge top of the group with three wins from three. They advanced to the quarter final where they got pulled against Kilmacud Crokes in the quarter final only to lose by the narrowest of margins. The Crokes went onto win the tournament. Panel for the Day: Tom Duffy, Cathal Malone, Conaire Casey, Tristan Nugent, Harry McQuillan, Tiernan McGeough, Donnchadh Murphy, Eoin Mulligan, Ruarc Marray, Cooper McMahon, Declan Flanagan, Caimin O’Brien and Ryan Corrigan. After the quarter final defeat former Faughs great and Kilmacud Director of Football Padraic Mc Donald spoke to the boys about how well they had played and encouraged them to practice their skills daily to make them Faughs Stars of the Future…. Great Advice Boys!

U14 Girls: U14 league continued last Monday night 28th against The Geraldines from county Louth who have joined the Monaghan league.
In the heat the girls played well with a good win over the Louth ladies.
Our next match is against Truagh next Tuesday with O Neil’s the following Monday night.

U10 Girls: Last Monday evening the Girls made the short trip to neighbours Doohamlet for a very entertaining Challenge match. Played in wet conditions the Faughs were slow to settle but once we got the first quarter behind us we played some lovely football and eventually came back to draw. Well done to all the Girls on a very entertaining evenings football.

U9 Boys: The lads travelled the short distance to Cloghan to take part in the All County GO Games blitz. In warm and sunny conditions, we put out 2 strong teams: Blayney1 was up against Scotstown, Donaghmoyne, Inniskeen and Clontribret, whilst Blayney2 were pitted against Scotstown, Donaghmoyne, Inniskeen and Aughnamullen. There were great performances in all the matches with the lads putting all their hard training into practice. The boys should be very proud of their fine efforts.

U7 boys: Our U7 boys joined their U9 teammates at the GO Games in Cloghan on Saturday past. There were great performances all over the pitch and it was wonderful to see so many future Faughs stars on show.

U15 Boys: Last Thursday the Faughs U15 Boys travelled to take on Patrick Emmett’s in Round 6 of the league, in what proved to be a very exciting and entertaining game from start to finish. The Faughs lads settled quickest, with some fine play and early scores from Martin Joyce, Jason Campbell and Niall Rice. The first half was played at a frantic pace with both teams trading some excellent scores, with no shortage of commitment, skill and fine score taking from either team. The Faughs lead by 5 points at the break. The Second half was even more competitive and there was to be no let up from either side throughout the half. The Faughs were forced into some rear-guard action midway through the second half as Patrick Emmets took a strong foothold on the game, and with 10 minutes remaining the home side opened a 3-point lead and looked to be in the ascendency. However, these young Faughs lads commitment and resolve is growing by the week, and when Niall Rice, Kealan Mc Mahon, Zach Mc Ardle and Ben Mallon took charge of the game it was to be the platform to propel the young Faughs lads to a hard fought and deserved win on a final scoreline of:

Senior Men: Our Senior men had a home league game against the Harps on Sunday past. Played in warm and sunny conditions, the Harps had the better of the first half, where the Faughs found it difficult to get any sort of rhythm. The lads done well on the scoresheet though and went in at halftime all square, Faughs 0-7, Harps 1-4. In the second half the Faughs took control from the throw-in and played some good football, scoring 5 in a row without reply. The lads were able to keep their advantage and the final score was Faughs 0-17, Harps 1-10. These were important points in terms of league position and hopefully the lads will push on from here.

RFC: Our B’s exited this year’s championship at the hands of a strong Scotstown team. Played in sunny conditions on Friday evening past, Scotstown started the stronger, even though they were down to 14 men with a sending off. The Faughs failed to capitalise on the numerical advantage and it was actually Scotstown who played the stronger football. Scotstown went in at half time in front: Faughs 0-4, Scotstown 0-8. The Faughs turned it around at the beginning of the 2nd half and a string of excellent points made the score 0-8 each after only 6 minutes into the 2nd half. The turning point came in the 15th minute when Mark Hanratty had a great chance of a goal, but unfortunately the ball hit the post. From this Scotstown worked their way down the field and scored a crucial goal of their own. Final score Faughs 0-13, Scotstown 1-14.

Good Luck: Good luck to all the Monaghan county teams playing this weekend and a special good luck to any of our club players representing our county.

Girls U14: is every Monday and Friday evenings.