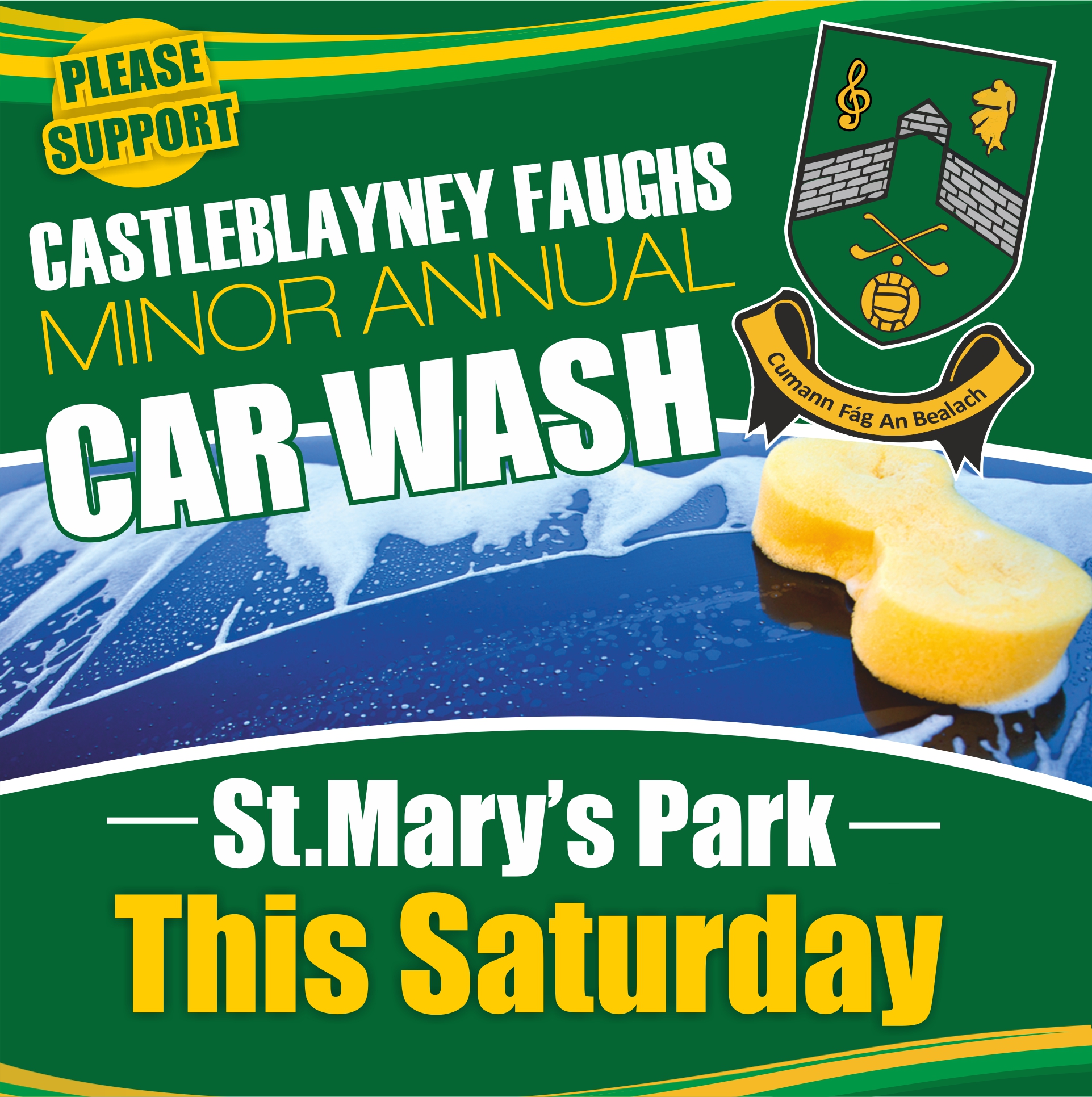 Minor/U16 Team Car Wash – Following on from the success of last years event, the Minor & U16 Teams have decided once again to hold a Car Wash. The lads will be washing cars at St.Marys Park from 10am-4pm, this Saturday May 9th, and they assure us no job is too big or too small. All funds raised go straight into the Minor/U16 Teams training fund. We ask everyone to support.

Senior Team – Saturday evening was more suited for Ducks than footballers as the Senior Team entertained Ballybay in St.Marys Park on a cold wet evening. The Faughs got off to a great start and when Barry Hanratty found the back of the net after seven minutes the lads led by 1-3 to 0-1 but to Ballybay’s credit they worked hard to get themselves back in contention and by half time were only two down. The second half opened with Martin McElroy adding a point before a goal brought the Pearse Brothers level, the conditions seemed to worsen and handling proved very difficult for both teams, entering the last ten the game was in the melting pot and a mistake on either side was going to be the difference and unfortunately for us it was the Faughs who made a couple of small mistakes which were punished by the Ballybay forwards. Final Score Faughs 1-8 Ballybay 1-11. Our next Senior Fixture is an away trip to Donaghmoyne on the 17th of May which will be a Star Game.

The Big Breakfast – The Club will hold a breakfast morning on Sunday the 24th of May in Iontas between 8.30am and 12pm, it’s an ideal opportunity for all Monaghan supporters to get an Ulster Fry before Monaghan play in their great rivals Cavan in the Ulster Championship in Kingspan Breffni Park at 2pm.Breakfast is great value at €8 per person and we encourage as many of you to come along for a good social morning. We would like to thank in advance all our sponsor who will help support the event .

Under 6 – The boys and girls training now moves to the football field this Thursday night and will remain there from now until August , the boys and girls should were runners and old clothes.

Under 8 and Under 10 Training – With training cancelled due to the poor weather it has been a quiet week for the Under 8 and Under 10’s, training will take place in the pitch this Thursday at the normal time, parents please insure boots and gum shields, we will also have training for everyone on Saturday morning from 10am to 11.15am.

Boys Under 12 – With the torrential rain the County Youth Board made a good call and moved the Spring League Finals finals day to Monday afternoon in Cloghan . The Senior Team played Sean Mc Dermott’s in the first match and played well from start to finish with some very strong performances from John Joyce, Leo Maloney, Zach McArdle and Paudie Heavin. The boys use of the ball was impressive but I think shooting practice will be the order of the day for the next few weeks on the training pitch. The Development team were next up when they took on the Harps, in a very entertaining game which embed and flowed from one goal to the other, the boys were narrowly defeated, best on the day for the development team was Joe Carey in Goals, Caolaoin McMahon and Ross Maguire impressed in defence while Thomas Hughes and Niall Rice battle hard in the middle with Conor Ruddy and Kevin Flanagan tried hard up front.

Girls Under 14– The Girls travelled to Aughnamullen on Monday night to play the Sarsfields in the league, they got off to a slow start conceding a goal form the throw in but battle back to level terms mid-way through the half and went in at half time only a point down. The second half started brightly with the girls getting there nose in front and entering the last ten minutes they looked as if they could gain both points but a very strong finish by an excellent Aughnamullen forward line insured that the valuable league points would stay in Aughnamullen. Best on the night for the Faughs were Caitlin McGeough, Melissa Carr, Jodie McQuillan and Aoibhean Fitzsimmons.

Boys Under 14 – After a week off the boys return to competitive action when the development team travel to Clontibret on Thursday night with a throw in time of 7.30pm The two teams are back in action on Saturday when the development team entertain the Harps at 12pm with the Senior team playing the Harps at 1.15pm.
Girls Under 16 – The girls have a home game on Wednesday 13th of May when they entertain St.Brigids at home in St.Marys Park with a throw in time of 6.45pm.

Boys Under 16 –The Faughs U16 team had a good win against Killeevan last Thursday evening. These lads are putting in some very good performance over the last few weeks with a great effort been put in by the whole squad but we have two very tough tests before the exam break. The Boys are off this Thursday night before we travel to Smithboro to play Eire Og on Thursday the 14th then we play Clontibret in our last league game the following Thursday before the break. Lads keep the god work up and let’s make sure we keep the push on for the next few weeks.

Minors – The Minor team were forced to concede their fixture against Patrick Emmetts due to unavailability of a number of players through injury. They how have a home game against Rockcorry on Tuesday the 5th of May at 7.30pm which will be there last league game before the Ulster Championship and the exam break.

Best of Luck – The Club would like to wish all the boys and girls who are making their first holy communion the best of luck over the next two weekend , let’s hope the weather improves for all the parties that are planned but remember it can be great fun on a wet bouncy castle.

Love In The South Pacific – Well known Faughs players and former players will take to the stage in of Íontas in a fund raising musical “Love In The South Pacific” on Friday 8th May & Saturday 9th May at 8.30pm. Among the Faughs to perform are Barry Hanratty, Ciaran Hanratty, former player and team manager Eamon McMahon and Noel McGuigan. Tickets are available at Íontas. €10 & €12. Your support would be greatly appreciated.