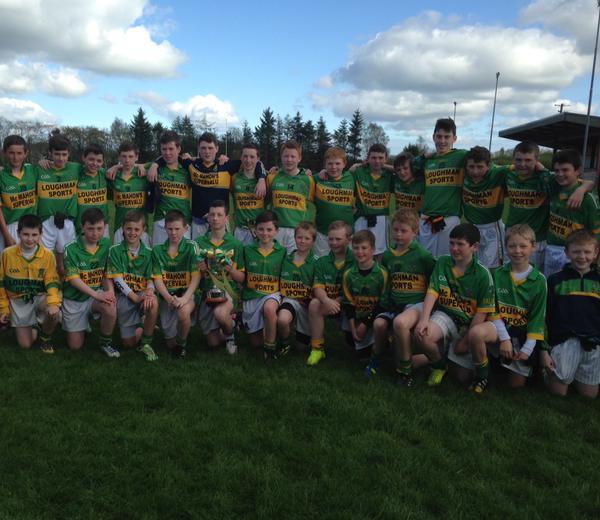 Senior Team – The Senior team had a disappointing result away to Monaghan Harps last Wednesday night, the Faughs struggled to get back up to the heights of the performance against Latton and allowed the Harps build a commanding half time lead of 0-8 to 0-2, the last quarter saw a bit of a recovery but it wasn’t enough to close the gap. Final Score Harps 0-12 Faughs 0-08. On Sunday afternoon we had a home game against Magheracloone, playing with the aid of a strong breeze the Faughs opened well with two points apiece from Dermot Malone and Martin McElroy, John Beattie kicked a nice score after twenty six minutes which was followed by another Malone point to give the Faughs a commanding half time lead of 0-9 to 0-2. The second half started with the Faughs adding to their total with scores from Fergal Malone and David McMahon at this stage the boys looked to be cruising but a good goal from Magheracloone after fifty minutes put the game back into the melting pot and entering the last five minutes the Faughs were two to the good before a Martin McElroy and a Patrick Tavey point insured a win for the Faughs. Final Score Faugh 0-14 Magheracloone 1-7. The lads now have a home game against Ballybay on Saturday with a throw in time of 7.30pm. Please check social media for the results and updates.

Under 8 and Under 10 Training – The Boys travelled to an away challenge match against Clontibret last Saturday morning at Under 8 and Under 10 level. In a great mornings football, Clontibret shaded the Under 8 match and the Faughs shaded the Under 10 match. It was great to see so many children playing for the Club for the first time particularly the boys who are six and seven hopefully they all have great long football careers playing in the famous Green and Gold. The morning was capped off when County and Clontibret Stars Dessie Mone and Conor McManus came to speak to both sets of players; both Stars commented on how impressed they were with the boys kicking skills and urged all the parents to spend time with their children in the back garden practising every evening. Thanks to Clontibret for organising the facilities and the morning. The Under 10’s will have training on Saturday morning in the field from 10 am to 11.15 am.

Boys Under 12 – The under 12 team travelled to Scotstown last Tuesday night for their final game in Zones A and Zone B and performed well in both games; with some of the hard work that they have been working over the last few weeks paying off. The Boys now have the Finals of the Spring league this Saturday in Cloghan – Our Development Team take on Monaghan Harps Development team at 2pm, with our Seniors playing Sean McDermotts at 3pm. We ask everyone to come out and support the lads.

Boys Under 14 – After an absence of ten years the Division 1 Championship Cup made a very welcome return to Castleblayney last Saturday evening. It is a significant milestone for the Club in its efforts to return to developing some of the finest talent in County Monaghan as well as been some reward for the large contingent of people who are working tirelessly to improve the playing fortunes of the Club at a juvenile level. The game didn’t start according to plan with Carrick netting straight from the throw in but this Blayney team is made of tough stuff and were quick to bounce back with points from the impressive Joshua Mone and the hardworking Robbie Hanratty before Mone found the net for the Faughs after thirteen minutes. Playing against a stiff breeze in the first half seemed to suit the running game of the Faughs and further scores by Niall Carville and Robbie Hanratty stretched their lead before Josh Mone found the net for the second time after twenty five minutes. Further points from Ciaran Duffy and the quick thinking, quick moving Conall McHugh saw the Faughs go in at half time leading by 2-9 to 1-2. The second half saw Carrick apply some good pressure but they were constantly repelled by a great Faughs defence and when Niall Carville found the net mid-way through the half it as good as sealed the win for the impressive Faughs. Final Score Faughs 3-11 Carrick 2-6. On the day James McAdam gave a very solid performance in goals, David Irwin at Full back had an excellent game keeping the Carrick forwards at bay, with the speedy Rory Mc Glynn and tough tackling Gearoid Coyle not giving an inch. The half back line Conor Mulligan, Colm Bishop and Michael Hughes were tough in the tackle with their supply of ball to the half forward line was of excellent quality. The big win for the team this year has been the finding of our midfield pairing of Max Rodgers and Eoghan Casey, these two lads worked unbelievable hard at getting enough possession to supply a dangerous half forward line of Conall McHugh, the intelligent Joseph Hughes and Joshua Mone, all who played excellently, the inside forwards of Ciaran Duffy, Niall Carville, Robbie Hanratty and second half substitute Conor Rice were very effective with a return of 1 -6, which is not a bad days work in any man’s book. This is a team in development and we had another ten young players who have been pushing the starting fifteen all the time, behind every good team there is also a good back room team. This team is no different with Mark O’Connor as head coach surrounding himself with a team of shrewd men like, Dessie McAuley, Raymond McHugh, Martin Carville, David Irwin and Martin McElroy; their reward now is a trip to the All Ireland Feile which takes place in the sunny South East on the 26th of June. Plans are already under way for the trip and the Club hope to be in a position over the next few weeks to outline the programme of events leading up to what will be a great weekend.

Girls Under 16 – The young ladies travel to Sean McDermott on Tuesday evening for a throw in time of 6.45pm. The Girls were very unlucky in their first game of the year when they went down to Latton by a couple of points, hopefully they can secure the two points which will get their season up and running.

Boys Under 16 –The Faughs U 16 team had a good win against a very young Corduff team last Thursday in St. Mary’s Park. Each of the players put in a great effort and displayed some great shooting during the game. The Faughs boys got off to a great start and continued in the same vein. Francis McGeough, Colin Merrick, Kian O’Connor, Jack Callan and Josh Walsh all put in a good evenings shift. Mark Hughes started his first game of the year and put in a very productive 60 minutes. Killeevan are the visitors next Thursday and the Blayney boys are expecting a tough challenge against a team led by Blayney’s own Ryan Comiskey.

Minors – The Minor team continued their recent good form last Tuesday when they made the very short trip to Blackhill to play Emmett Sarsfields . In a touch match the boys emerged victorious by four points, the pleasing part of this victory was that we were forced to field without some of older minors thus leaving the younger members of the team to step up to the plate which they most certainly did. Best on the night for a youthful Minor Team was Colin Merrick, Gavin Kelly, Joshua Walsh , Stephen Beattie with Brandon Rice putting in a great effort right from the start. The Boys have an away fixture versus Patrick Emmett’s in Scotshouse this Tuesday night with a throw in time of 7.30pm, this will be followed by a home game against Rockcorry on Tuesday the 5th of May at 7.30pm.

Love In The South Pacific – Well known Faughs players and former players will take to the stage in of Íontas in a fund raising musical “Love In The South Pacific” on Friday 9th May & Saturday 10th May at 8.30 . Among the Faughs to perform are Barry Hanratty, Ciaran Hanratty, former player and team manager Eamon McMahon and Noel McGuigan. Tickets are available at Íontas. €10 & €12. Your support would be greatly appreciated.