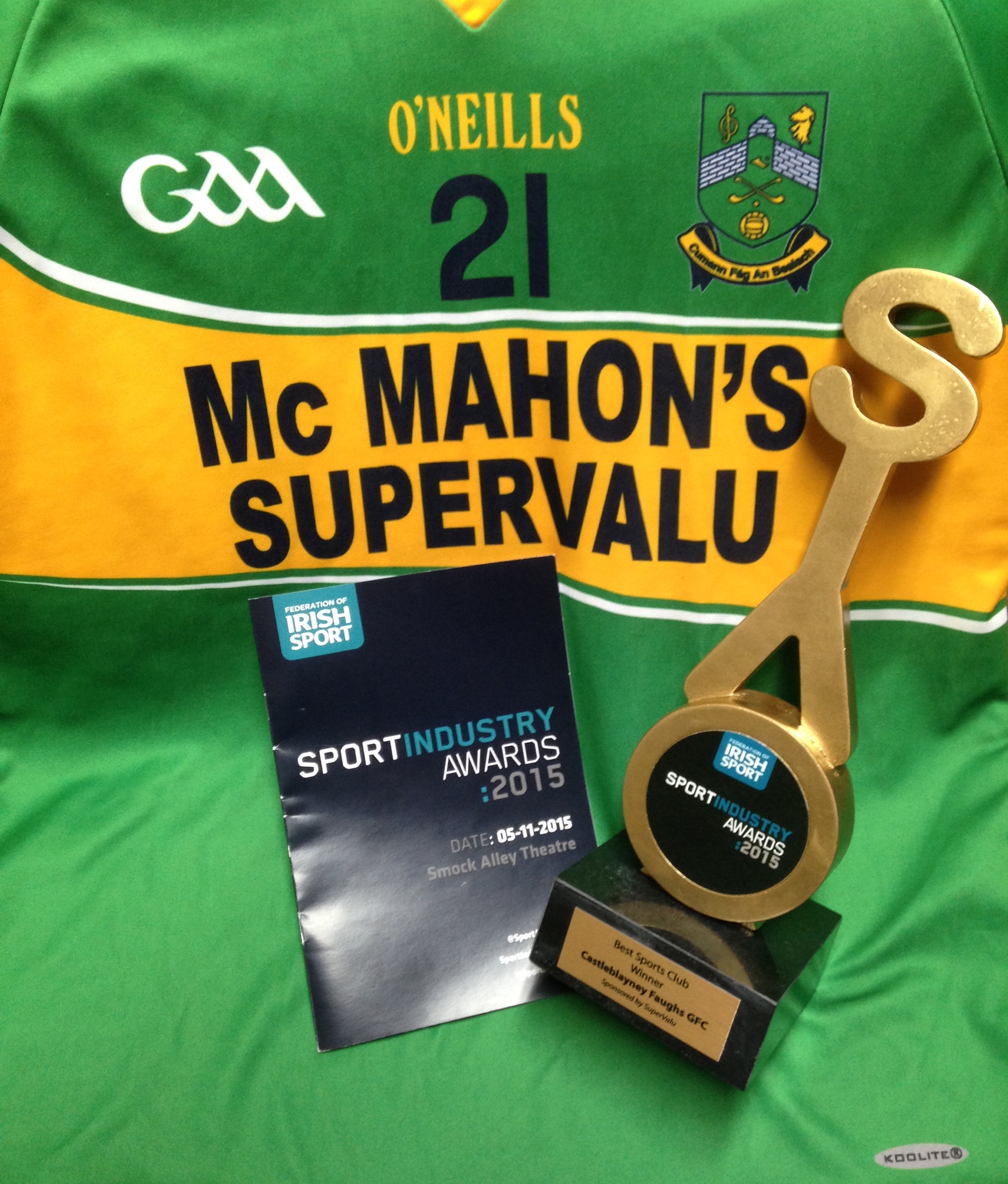 National Sports Club of the Year: Castleblayney Faughs work within their local community was once again recognised last Thursday evening when the Club won the “Best Sports Club Award” at the National Sports Industry Awards held in Smock Alley Dublin. It is the latest award the club has received in recognition of their efforts to support and improve their interaction not just with their membership but with the wider community they serve. The club was named Ulster Club of the Year in 2014 at the provincial president’s awards and was also recognised as Sports Club of the Year and overall Community Group winner at the Monaghan Rehab People of the of the Year awards in 2012. The Club were confirmed as the sports club of the year for their innovative use of the club’s facilities to engage the wider local community, the Club was highlighted for their development of the club on a number of fronts such as ground improvements, Coaching structures and their Healthy Club initiatives. This is yet another indicator that the Club are doing all the right things in their efforts to establish the Faughs as one of the leading GAA Clubs within Ireland, we wouldn’t achieve these kind of accolades without the support of the Club and indeed the wider community but rest assured that while we are achieving National prominence for our work we will continue to work extremely hard so that our success off the pitch is replicated on the field of play over the next number of years. Well done to everyone within the Club and the Community on achieving such an award we are lucky to have such a great community and a great club.

Winter Programme: The Winter Programme will continue for the next four weeks, with Under 6’s Boys and Girls training on Thursday evening in Rath Na NOg at 6.00pm to 6.50pm. Girls Under 8 and Girls Under 10 training takes place on Monday evenings on Our Lady Secondary School (OLSS) Astro Turf from 6pm to 7pm while Boys Under 8 take place on Thursday evenings on OLSS Astro Turf from 6pm to 7pm followed by the Boys Under 10 also on OLSS Astro Turf from 7pm to 8pm on Thursday. If you know of any children in these age groups who would like to attend please feel free to take them along any Monday or Thursday evening, we would only be delighted to see new faces. Any queries please ring Brian Sherry on 086 2334287 or Keith Hanratty on 086 8225982.

McMahons Supervalu 5K: The ability of the Castleblayney to attract some of Irelands top sporting people to their McMahons Supervalu 5K was evident again this week as the Club were delighted to announce that double Olympian and current Irish men’s 800 metre record holder David Matthews will attend the annual race on Sunday the 29th of November at 2pm. At his favoured 800 metre distance, he won consecutive national titles outdoors in 1994–95–96–97 and indoors in 1993–94–95; He won the bronze medal at the 1993 European Junior Championships, reached the semi-final of the 1996 Olympics and the heats of the 2000 Olympics. Matthews is the current Irish record holder at 800m with a time of 1:44.82, which was set in Rieti, Italy, on Sept 5th 1995 and he also held the Irish record for the quickest 1000 m outdoors. So why not come out and join David on the Clubs 5K we are asking that every Club member participates on the day, registration is available online at www.castleblayneyfaughs.com or www.Runireland.com.

Operation TransFAUGHSmation: Last Friday we were all in Rath na nOg for a very tough class of Pilates with Janet Keenan, it was just great timing for losing out those sore limbs after the previous Tuesday nights class, on Sunday it was great to see so many people turn up in the pouring rain for the Walk/Run obviously the poor weather can’t put of these determined people from OPTFM. This week sees another circuit class on Tuesday, followed by Boxercise with Orla Mc Carthy on Friday and the second last walk run which will take us on the race route.

Pauline Devlin Walk: St Louis School in Monaghan have reorganised their annual walk in memory of our good friend and coach Pauline Devlin this Sunday 15th of November at 12pm, if you are available please call down the walk in a 3 k route which is a nice walk, this was a very enjoyable day last year with a cup of tea and a chat afterwards. The walk starts from the grounds of the Louis School.

Monaghan GAA Coaching Conference: A large number of club coaches attend the Monaghan GAA conference last Saturday in Our Lady’s Secondary Schools, among the guest speaker were Diarmaid Marsden speaking about Club Coaching Structures, Ryan Porter gave a very good practical session on use of the ball within training while Oisin McConville spoke on how Crossmaglen have developed their Club to been one of the strongest in Ireland. The evening finished with a very informative questions and answers session hosted by Northern Sounds Sean McCaffery with Monaghan Double All Star winner Conor Mc Manus, Dick Clerkin, our own Club Legend Nudie, County Senior Team Manager Malachy O’Rourke and Padraic Dowdall the Ulster Hurling development officer. Well done to the Games Development Team for a very well-run and informative event.

Welcome: The Club would like this weekend to welcome An Tóchar GAA Club from Roundwood in Wicklow who are coming to Castleblayney as part of a return visit from our time in Feile last June, we hope that these young under 14 boys enjoy their time in Castleblayney as much as we did down in Wicklow, there will be an evening activity on Saturday as well as a challenge match organised over the weekend we will keep everyone up to date during the week.

St.Marys Park: You will see from your visits to St.Marys Park that the Senior Pitch has been closed for the foreseeable future, we would ask that all players would do their shooting practice down at the bottom goals at the Golf Course side of the Juvenile Pitch, we appreciate your cooperation, ultimately it will leave us with a better surface to play on in 2016.

Well Done: This week’s well done goes to each of our for making the Castleblayney Faughs the Best Sports Club in Ireland, this is a massive achievement for everyone connected to the Club, while we are always pushing ourselves for further improvement its times like this that you realise how far we have come over the last number of years, a big well done to you all.