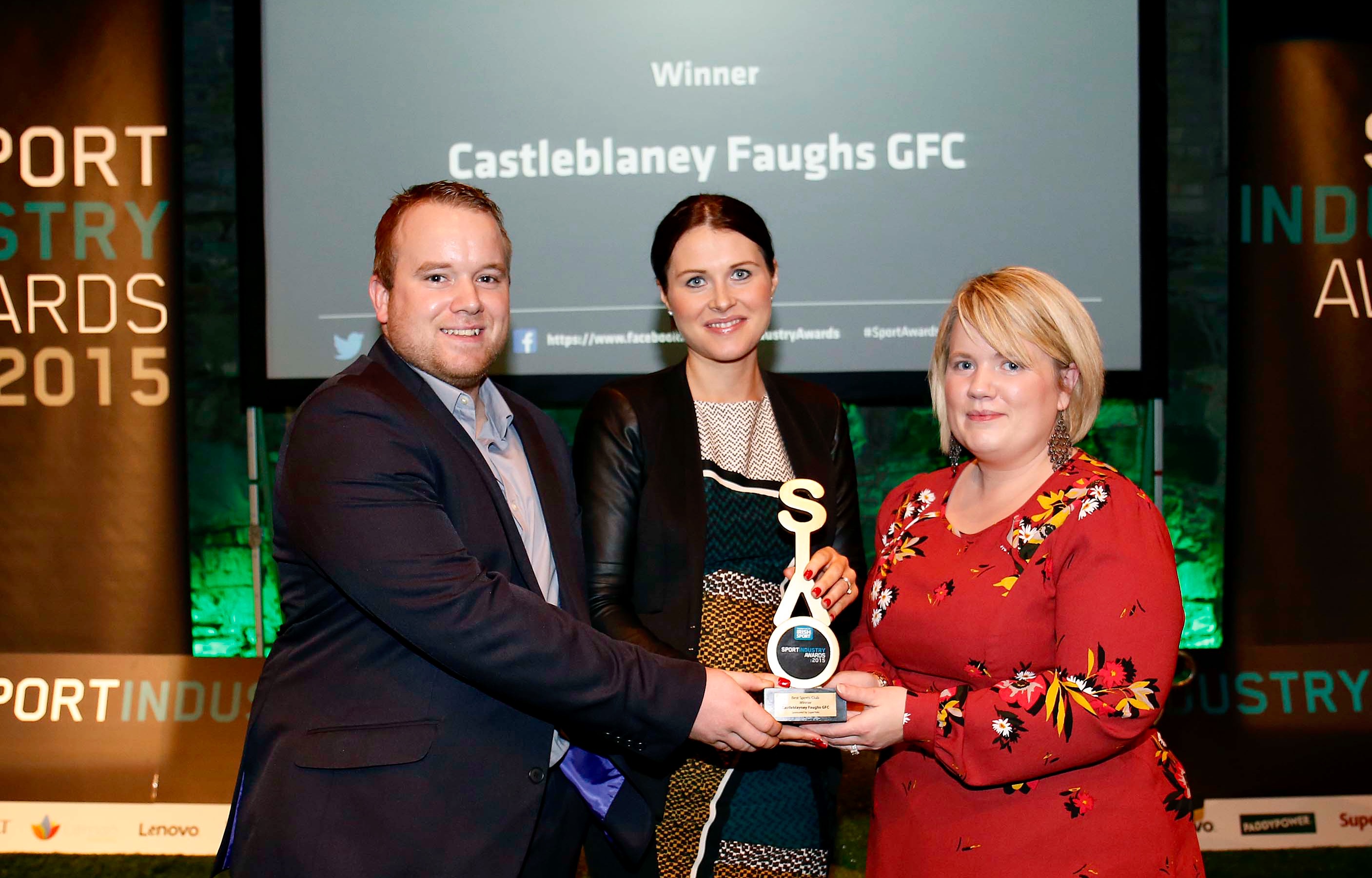 Castleblayney Faughs work within their local community was once again recognised last Thursday evening when the Club won the “Best Sports Club Award” at the National Sports Industry Awards held in Smock Alley Dublin. It is the latest award the club has received in recognition of their efforts to support and improve their interaction not just with their membership but with the wider community they serve. The club was named Ulster Club of the Year in 2014 at the provincial president’s awards and was also recognised as Sports Club of the Year and overall Community Group winner at the Monaghan Rehab People of the of the Year awards in 2012.
The sport industry awards are designed to recognise and reward excellence in the business of sport whilst showcasing the contribution of this developing sector to Ireland’s economy. An experienced and knowledge judging panel drawn from both the sport and business communities including, former Dublin Football Manager and Veolia CEO, Pat Gilroy and Consultant and Santry Sports Clinic Founder, Ray Moran determined the winners. Matt Cooper who chaired the judging panel also acted as MC at the award ceremony. The Faughs were nominated in the Best Sports Club section alongside Glanmire Basketball Club the from Cork City who are the biggest basketball club in Munster while the other nomination in the category was for the Wicklow Swimming Club which is one of the largest Swimming Clubs in Leinster.
Castleblayney Faughs GAA were confirmed as the sports club of the year for their innovative use of the club’s facilities to engage the wider local community, the Club was highlighted for their development of the club on a number of fronts such as ground improvements, Coaching structures and their Healthy Club initiatives.
Other winners included The Sunday Business Post who were acknowledged for excellence in media coverage for their Business of Sport section which has become a weekly feature in the publication over the last 12 months. eir’s support of Special Olympics Ireland was recognised as the best CSR initiative in sport whilst, the National Sports Campus came out on top for the best sports facility.
Dublin Footballer Bernard Brogan who is President of the Federation of Irish Sport said; “With such high calibre entries, each of our twelve award categories were keenly fought. We were delighted with the scale and range of the entries in our first year of the awards and we wish to congratulate the winners on the high standards that are being reached by Irish sports businesses in Ireland and around the globe.”
The winners were announced and acknowledged at the Smock Alley Theatre in front of Minister for Transport, Tourism & Sport Mr. Paschal Donohue T.D., industry peers, media and sport personalities. Guest speakers at the event included Professor of Management Studies at Salford University and Director of the Centre for Sports Business Chris Brady, Corporate and Commercial Sports Lawyer Ian Lynam and award winning Journalist and Author Donald McRae.

2015 Sport Industry Award Winners:
Best Global Sports Campaign: #thisgirlcan
Best Use of a Social Media: IRFU #shouldertoshoulder
Best Mass Participation Event: Kellogg’s GAA Cúl Camps
Best Innovation in Sport: Jumping in the City – Horse Sport Ireland
Best International Sports Event: ICC World Twenty 20 Qualifier – Cricket Ireland
Best Corporate Social Responsibility Initiative in Sport: eir – Special Olympics Ireland team
Best Activation of a Sport Sponsorship: AIG & PSG Sponsorship – Dublin GAA
Emerging Sport Business: Nutritics
Established Sport Business: STATSports
Best Sports Facility: National Sports Campus
Best Sports Club: Castleblayney Faughs GFC
Excellence in Media Coverage: Business of Sport – Sunday Business Post
Melissa Conlon Senior Club Secretary picked up the award alongside her brother Paddy Conlon on behalf of the Club and was obviously delighted afterwards, “This is another great achievement for the Club, over the last number of years we have seen a number of awards for the Club at a National, Provincial and County level for our engagement within the community, we also have picked up the Club Maith Platinum award for our club structures and have received other awards at both County and Provincial levels for our Club Coaching Structure, it’s great recognition of the work been done by the club in a number of areas. The Castleblayney Faughs will continue to work very hard at all levels to insure that the people of Castleblayney have a GAA Club that they feel proud to be part off, we would like to thank the people of the local area for their continued support, hopefully everyone feels very proud of our local community and the Faughs GAA Club”.