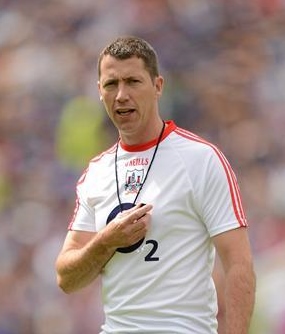 The ability of the Castleblayney Faughs to attract some of Irelands top sporting people to their McMahons Supervalu 5K was evident again this week as the Club were delighted to announce that double Olympian and current Irish men’s 800 metre record holder David Matthews will attend the annual race on Sunday the 29th of November at 2pm.
David who lives in Leixlip in County Kildare, is now regarded as one of the country’s top experts in physical fitness and as recently as January 2015 was appointed by Athletic Ireland as the athletic development officer with in Cork Institute of Technology. In his spare time David also acted as the fitness advisor to the Cork hurlers a position that he had held since 2011 up to last season.
At his favoured 800 metre distance, he won consecutive national titles outdoors in 1994–95–96–97 and indoors in 1993–94–95, He won the bronze medal at the 1993 European Junior Championships, reached the semi final of the 1996 Olympics and the heats of the 2000 Olympics. Matthews is the current Irish record holder at 800m with a time of 1:44.82, which was set in Rieti, Italy, on Sept 5th 1995 and he also held the Irish record for the quickest 1000 m outdoors
David expressed his delight at been available for the run, “I have heard about Operation TransFAUGHSmation a few years ago through a good friend of mine who work In Castleblayney had have also seen the Video that the GAA Health and Wellness team produced about the 5K which looked very impressive”. David continued “we have seen since the start of the recession the number of people who have turned to Health and Wellness increase significantly and thankfully as we emerge into better times those numbers have continued to rise. Programmes similar to Operation TransFAUGHSmation are helping to improve people’s physical and mental health which is extremely important in the longer term. I am really looking forward to the race on the 29th of November.
The Mc Mahon’s Supervalu Castleblayney 5 km run takes place on Sunday 29th of November at 2pm. Online registration is open through www.runireland.com or www.CastleblayneyFaughs.com. Entry fee is €10 pre-registration or €13 on the day. The Club are looking for all locals to participate during the event whether you’re a walker, runner or an interested spectator, the Club would like to see you there on the day.
There will be cash prizes and novelty prizes including the Fastest Club in the North East. David will be joined by a host of local celebrities who are also running. This is a great event, why not come along and join in one of the last local races before the Christmas Turkey!