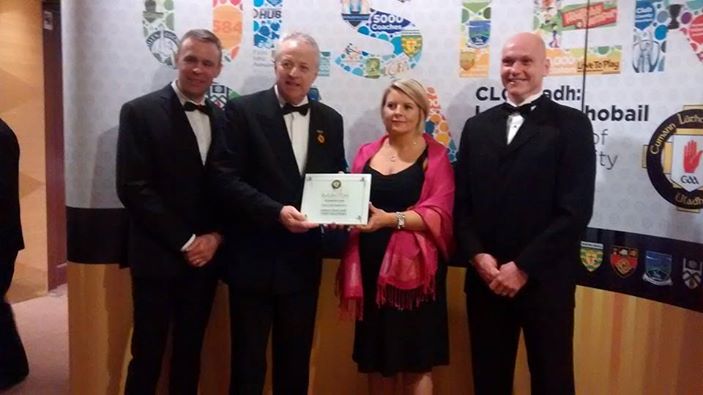 Saturday night proved to another great evening for everyone involved with the Castleblayney Faughs as the Club won the Overall Club award at the Ulster GAA Presidents Awards night. This year’s awards were based on Club submission based on the Club Maith programme run by Ulster GAA. The Club Maith accreditation is a scheme which allows Clubs to benchmark themselves against best practice, it is seen as something similar to the ISO Trade Quality mark for GAA Clubs. In doing so, it encourages Clubs to aim for excellence in the core areas of GAA club activity, i.e. governance, duty of care, community enhancement, culture & heritage, and coaching & games development. Clubs are then given a level of accreditation, which acts as a quality mark for them. Currently the Castleblayney Faughs along with Warrenpoint are the only holders of the top prestigious Platinum award. The Faughs submission was based on Operation TransFAUGHSmation and was made under the Duty of Care category which is part of the overall Club Maith programme but Club officials were delighted when the Club was announced as the overall Winner of the top award. This the second year in a row in which the Club have been honoured, last year’s submission on coaching receiving second place overall and the Club were delighted to go one step further in 2014.
Club Secretary Melissa Conlon who is the main driver behind Club Maith within the Club was delighted with the award “This award is a massive achievement, there about six hundred Clubs in Ulster and to win the overall prize is a brilliant accolade to receive. Our Club Development Plan “Clearing the Way” and our Club Maith Portfolio have been two of the most important pieces of work our Club has undertaken in the last 5 years. Both made us stand back as a Club and take an honest view of where we stood, what we needed to do. While sometimes these things can be seen as just a paper exercise, we are lucky to have a number of dedicated committed members who grabbed the plans and worked tirelessly to ensure we made the necessary changes and improvement required to make our Club a better place for all. Tonight’s award is justification of those pieces of work and while we are aware that we still have some distance to go before we are the finished article, we have to be extremely proud of the journey we have travelled so far”.

Ulster GAA President Martin Mc Avinney is highly impressed with the work been undertaken by the Club “The Castleblayney Faughs have always been one of the biggest Clubs in Ulster GAA over the years and the ongoing development will insure that they remain right up there. They are deserving winners of the award, last year they were second overall and this year they have come back to win the award which is testament to their hard work. Today at the Ulster GAA Health and Wellness they give a fantastic presentation of how Operation TransFAUGHSmation works for a GAA Club. You just have to look around the club to see their great work, in the last twelve months they have opened a new 2,000 seater stand, they have won community awards for their participation in the local community and this year saw them return to winning trophies at a Juvenile level, which all points to a successful future, well done to everyone involved within the Club it is really a great achievement”. Indeed, well done to everyone at the Castleblayney Faughs, the future really looks bright.