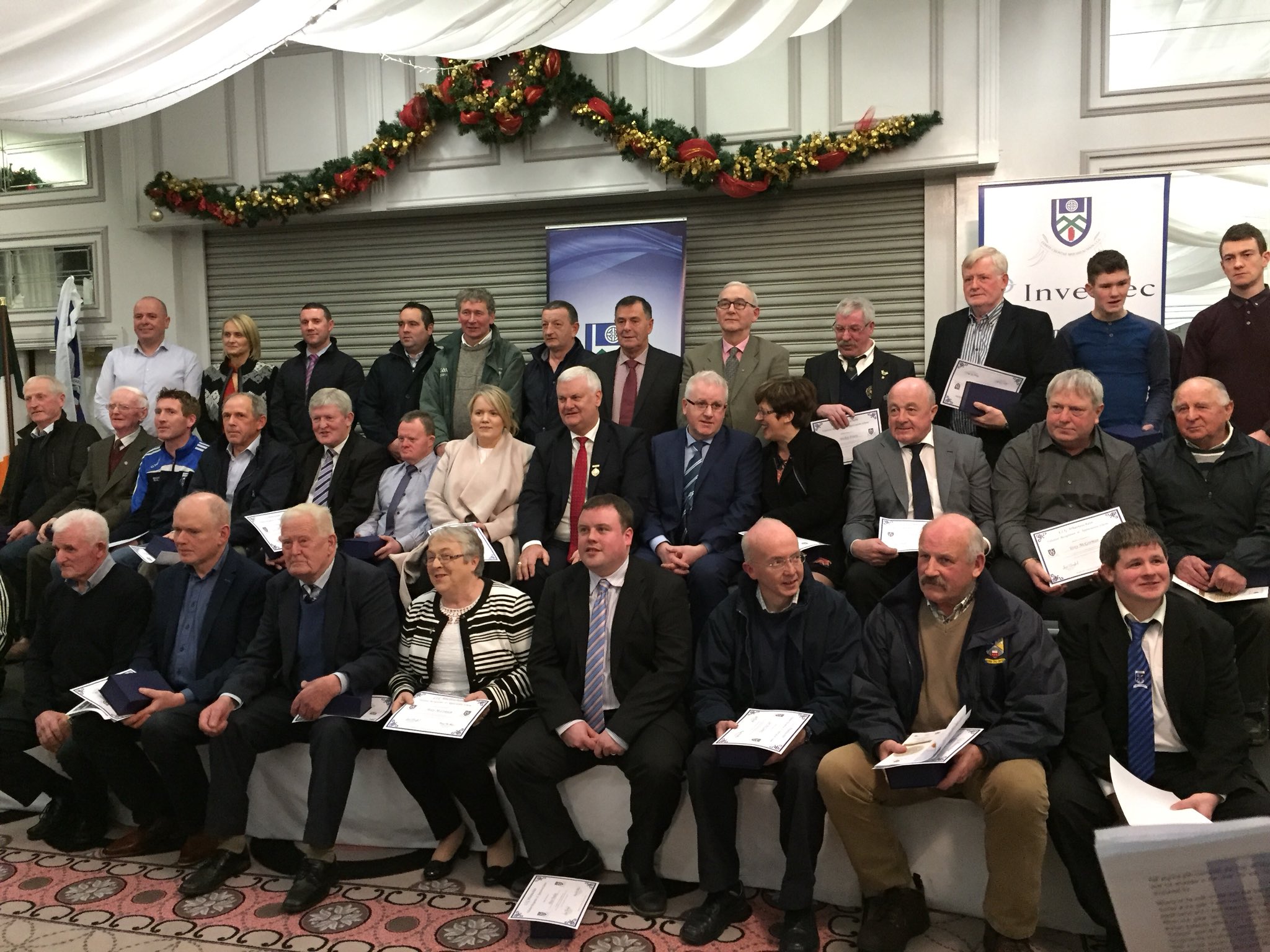 Christmas Lunch: A big thanks to everyone who helped organise the Christmas lunch on Sunday past in the Glencarn. There was a great crowd in attendance, great food and even better craic. The five in a row team were honoured and a special DVD given to them, whilst the Minor Champions from 2012 were also in attendance.

New Book: Well done to Tommy McGuire who recently released a new book, “The Runner McGough”. This book tells the remarkable story about John McGough who grew up in Glasgow and was an Olympic athlete, masseur with Celtic and trainer with Manchester United in the early 1900’s. However, John McGough would be better known to Castleblayney GAA Stalwarts as he was a masseur and would have treated them in his home in Annaglaive for various pains and ailments picked up in the course of their football days. Little did these players know at that time of the greatness of the man who was rubbing them as a masseur.

The book called “The Runner McGough” is for sale in Declan Loughman’s and McMahon Super Valu.

Also, recently released is a new book telling the history of our neighbours Blackhill. Titled “The Blackhill Story”, the book was officially released on Sunday past.

Well Done: A special well done and thanks to all the volunteers who were recognised recently at the Co. Monaghan Volunteer appreciation awards night. A special mention to our own secretary Melissa whose hard work and dedication goes largely un-noticed but which is vital to the success of the club both on and off the pitch, so this award is richly deserved. Well done Melissa!

Monaghan Year Book: The 2017 Monaghan GAA Yearbook, available throughout the county, is a review of another eventful year.

The book gives a comprehensive look-back at a busy 12 months, with the fortunes of each of the county teams in football and hurling are reviewed, including a lengthy campaign for the senior football side.

High-quality photographs covering all aspects of the GAA in Monaghan appear throughout the book, courtesy of Christy Lappin, Fintan McTiernan, Séamus McQuillan and Glenn Murphy.

With all this at a price of just €10, the Monaghan GAA Yearbook – produced by R&S Printers – is great value and would make an ideal Christmas present.

Coaching Courses: A number of valuable coaching courses have been announced:

On January 4th the “Banty” will deliver a course on “The Role of The Manager”, with a focus on Key Values, Backroom Team and how to get the Best out your Players.

After this, Scotstown Senior Manager, Kieran Donnelly will facilitate a practical workshop on Small Sided Games, with the focus on Developing Fitness, Skill Level, Decision Making and Game Understanding.

These courses are suitable for Coaches and Managers of U16 up to Senior, but anyone can attend (Cost: 5 euro).

Best Wishes: Merry Christmas and a happy New Year to everyone. We hope everyone has a peaceful and enjoyable Christmas – we will see you all in the New Year!

Clontibret O’Neill’s are hosting their 2nd “Gold Rush” – a 3 or 5 mile fun run/walk on Wednesday 27th December at 2pm.
All donations on the will be divided between two charities with local involvement;-

1 ) Monaghan Branch Downs Syndrome
Their services provide 1 on 1 speech therapy, OT, and music therapy every week. This service currently has two teachers, is invaluable to the families of Down Syndrome children, with early intervention being the key to the development of these special children.

2) Mater Foundation, St Vincents Ward, Family Room.
A young O’Neills Shamrock’s player was this year a patient in the Mater Oncology Unit. Her parents would be delighted to donate proceeds from the run, to the family room for the comfort of patients and families at such a difficult time in their lives.

Juvenile Training: Winter Juvenile training is now finished for the year. Training will resume after Christmas.