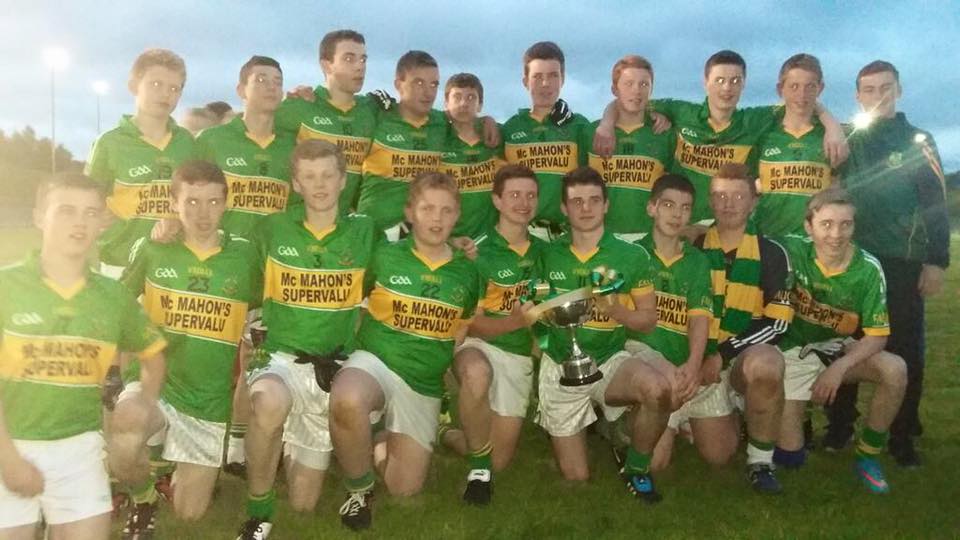 Senior Team: The Senior team put in an impressive shift last Saturday night when they played Truagh in the back door section of the Championship. The Faughs opened well with a great point from Patrick Tavey which was followed by another from Pauric Greene and Club Captain Martin McElroy. The lads built on that lead and went in at half time leading by 6 points on a score line of Faughs 0-8pts Truagh 0-2pts. Truagh came out at the start of the second half looking to get some quick scores on the board to reduce the deficit but some intense Faughs defending saw them hold off the Truagh challenge and when Ciaran Hanratty found the net ten minutes into the second half the victory was heading Blayney way, the game was killed off when young Mark Kelly found himself on the end of a good Faughs move to slap the ball into the back of the Truagh goal. Well done to everyone involved, a couple of championship victories always puts a pep in the step. We now return to league action this Sunday at 12.30 when we play Inniskeen in an extremely important league game, the next round of the Championship will more than likely be on the weekend of the 18th/19th of September.

Boys Under 10: The boys travelled to Clontibret last Saturday where they play in the Go Games series, we played Clontibret Carrick and Aughnamullen, with all games been very tight. This week the Under 10 (the boys born in 2005) will travel to play in the Gown Tournament in Cavan which is always a very good yardstick to see where our development is, we will communicate the travel plans later in the week.

Girls Under 12: The Girls have home advantage for their semi-final this Wednesday evening when they take on O Neill Shamrocks in St.Marys Park at 6.45pm. The Girls have had a very successful year competing in the top division of Girls football and have made great improvements during the last twelve month. Check Twitter/Facebook and Web Site for the results, well done Girls keep it going.

Boys Under 11: The Boys are now entered into the prestigious BC Tournament in Emyvale on Saturday 19th of September, we will organise the training schedule for this group over the next few days, boys just remember to keep practicing the basic skills at home in the house.

Boys Under 14: The development team played Cremartin in the Semi Final of the Division 4 Shield Competition, this young Faughs team have been battling very hard all year in a tough division and last Saturday entered the match as underdogs. The great thing about this team is their skill and determination, as we have said on a couple of occasion this year the lads are small in size but massive in skill, heart and mental determination. The started the game bright and when Cillian Hanratty rattled the net twice in quick succession they had played a very strong platform for victory, they went in at half time leading by seven point and when Cremartin came out in the second half throwing everything at these young Faughs lads they responded with a couple of brilliant scores on the counterattack to emerge victorious on a score line of Cremation 1-4 Faughs 2-9. Well done lads.
The boys now go forward to the shield Final this Saturday with a time and venue yet to be confirmed. The Senior Team are down to play Monaghan Harps in Gavan Duffy this Wednesday evening at 6.45pm, please note the change of date. Best of luck to both teams.

Girls Under 14: Our U14 Girls travelled to Tyholland on Wednesday last for their Championship Match against Tyholland. The Girls were focused on the job at hand and they knew that if they wanted the chance to qualify for the Championship Semi-Final they had to come out fighting against a tough Tyholland team. The girls went several points ahead in the first few minutes of the game with some fantastic points being scored by Jodie McQuillan, Aoibhean Fitzsimons, Nicole Maguire, Shannon Nolan and Sally Maloney. The girls never faltered once in defence putting the Tyholland forwards under serious pressure and pulling off some very brave blocks. Led by their outstanding keeper Kaitlyn Collins – the defence of Melissa Carr, Emma Glynn, Rachael Cannon, Sarah Wilson, Janine McBennett and Shona Brady – they all worked and fought tirelessly for their team constantly chasing every ball and fighting hard to secure possession for their team. In full forwards, a sister duet of Aoife and Caitlyn McGeough ensured that the Tyholland defence was under severe pressure throughout the game with both sisters securing some great scores for their team. The girls continued their relentless attack and showed their determined spirit throughout the game to secure a well deserved place in the Championship Semi-Final on Sunday the 13th September at 1 p.m. were they will face Latton in the hope of securing a place in the Final. Best wishes to the girls

Boys Under 16: On Thursday evening the Faughs Under 16’s travelled the short distance to Toome to take on Clontibret and attempt to complete their Championship and League double. This was the 4th meeting of the teams during the year and never more than a kick of the ball separated the two in those games. The game began with both teams exchanging points and it looked like another game going down to the wire. However before half time this Faughs attack clicked and fired in 4 goals as they pushed forward with some great combination play. Great scores from Mark Hughes and Craig Callan gave Blayney the half time advantaged. However it was the support play of Declan Hughes, Josh Walsh and Stephen Beattie which laid the foundation for these scores.
Despite the half time lead, a second half fight back was expected and so it transpired. Clontibret quickly went about reducing the lead as they drove at Blayney but as has been the case all year, great defending held out Clontibret until this determined Blayney team succeeded in regaining their momentum. Colin Merrick, Ryan McKernan and Gavin Kelly fought tenaciously to keep the Clontibret fight back at bay. With Blayney under so much pressure, the kick outs were vital and once again Kian O’ Connor found his man time and time again. When the Faughs did regain control some great long kick passes, particularly from David Irwin and Robbie Hanratty exposed space in the Clontibret rearguard as they attempted to push forward with Craig Callan and Josh Mone in particular exploiting the opportunities with some great finishing and substitute, Francis McGeough, who had missed a large part of the year through injury marking his return with a well finished goal..
In the end Blayney took the honours against a strong Clontibret team which featured some of Monaghan’s finest Under 16’s but were unlucky because as they launched the comeback it opened up the spaces in their defence which created a number of goal chances at the rear which were eagerly snapped up by Blayney. However it was the work rate and teamwork of the young Faughs team which helped them to victory.
Each and everyone of the panel right through the year worked for each other and this hard effort resulted in them achieving the double and finishing with an unbeaten season. Josh Walsh accepted the cup from John McArdle of the County Board on behalf of his fellow players in front of a large
Faughs support. The supporters were undoubtedly hoping this young team will continue their hard work and application which will see them graduate to the Faughs seniors in the coming years.

Girls Under 16: Last Saturday our Under 16 team travelled to Aughnamullen to play Doohamlet in the County Final, this was the first time we had qualified for a final at this age level so it was major achievement in itself. The Girls were nervous and struggled to settle and before we knew it we were 4-3 to 0-1 down inside twelve minutes but from that point on the Girls rallied to the task. They just got stuck into the game and contested every ball as if their lives depended on it, the defence of Goal Keeper Ellen Hamilton, Lauryn Hughes , Lisa Rooney , Janine Mc Bennett, Eleanor Doyle and Aine Clarke just shut up shop , with the Doohamlet forwards been constantly under pressure, in the middle of the park , the impressive Sally Maloney and Eileen Cullen showed that they really will be stars of the Future as they won the ball repeatedly and supplied a forward line of Aoife Cullen, Shaunine Rice , Nicole Maguire , Aoibhean Fitzsimons and Erin Brady. The Faughs battled hard and by half time had the deficit cut to ten points on a Score Line of Faughs 0-5 Doohamlet 4-3 , the second half saw a resurgent Faughs chip away at the Doohamlet lead to get back to seven points before a Doohamlet goal restored their lead to ten points , most teams at this stage would normally throw in the towel but not these bunch of ladies , further points from Aoibhean Fitzsimons, Nicole Maguire and Eileen Cullen saw the gap reduce to seven again before a Aoibhean goal set us up for a grand stand finish. With Shannon Nolan, Amy Woods and Caitlin McGeough adding fresh legs the Faughs girls pushed forward for three more points and with seconds left the Doohamlet Goal Keeper made a great save to prevent a match winning goal. Final Score, Doohamlet 5-3 Faughs 1- 14. Well done to everyone concerned team, management Darren, Mickey, Fiona, Brendan and Grainne, the players who deserve great credit for showing the really Faughs character by fight tooth and nail to get back into the game and to the wider panel who could be seen encouraging each player on right throughout the second half, let’s make sure that we continue to work hard through the winter to get back to another final next year and win that deserving trophy.

Minor Girls: The Girls next two games are both home games, the first will be against Sean’s on Sunday 13th of September with a throw in time of 5pm with our next league games in St.Marys Park on Sunday 20th of September versus Killeevan at 7pm.Ladies keep up the great work, two more wins and we should make the semi-finals.

Operation TransFAUGHSmation: So we are up and walking at this stage with the first night now over us , we hope to see everyone at the Black Island for the walk on Friday 11th at 6.30pm for the first activity which will be a walk around the back island followed by our walk around Mullyash on Sunday morning. On Tuesday evening we will have the first of the circuit’s classes which will no doubt be tough but also very enjoyable.

Well Done: This week’s well done goes to both our Boys and our Girls Under 16 teams with both putting in brilliant performance in their respective finals to show that the Faughs have indeed got a bright future in front of them, well done also to Jodie McQuillan who played at half time in the All Ireland Hurling Final as she represented Castleblayney Camogie, Jodie has played on lots of different Boys and Girls teams with the Club over the last few years and is hopefully a future Faughs Star.