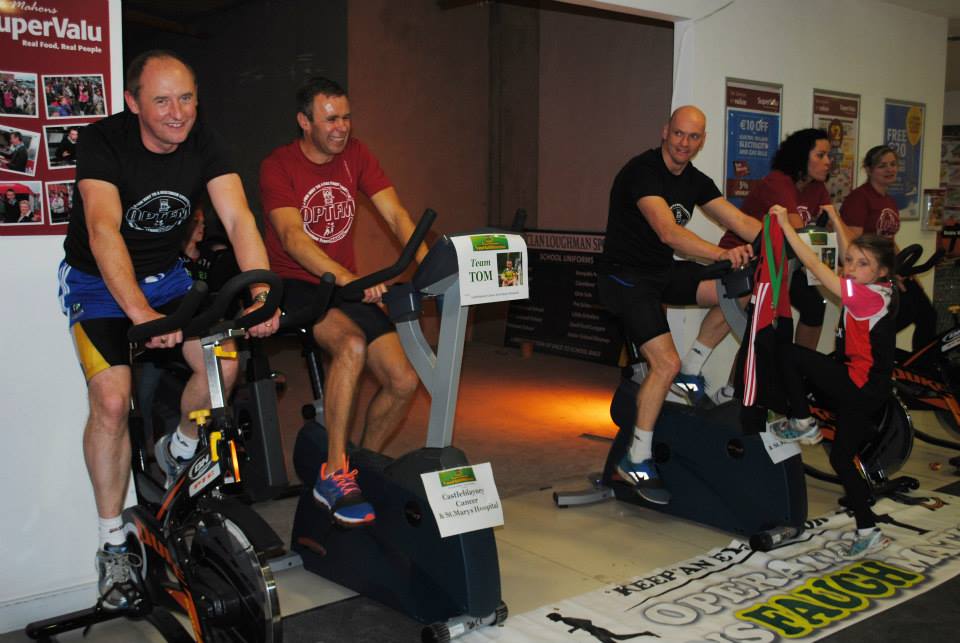 Last week proved to be one of the busiest weeks of the year for everyone involved in Operation TransFAUGHSmation with the group holding a hugely successful Charity Cycle in the Glencarn Shopping Centre last Saturday. This event which was tentatively muted by the Faughs crew back in August grew to become a huge success and with assistance from Muckno Tri and a number of other groups in the town the event succeeded in raising over €3200 in donations, all of which is going to the Operation TransFAUGHSmation’s nominated charities for 2014, namely St Marys Hospital and the Castleblayney Cancer Society. Those present kept ten bikes peddling from nine in the morning until five in the evening with queues all day made up of people willing to do their bit. Five Firebrigade men in full uniform was one of the many sights to remember. Community Spirit is certainly alive and well in Blayney and this was reflected in the wonderful atmosphere throughout the day. From the start of Operation TransFAUGHSmation it has being one of the groups aims to help build this Community Spirit as well as improving the health and fitness of our area. The cyclists, collectors and those who donated are to be commended for giving up their time and money in such good spirit.
Operation TransFAUGHSmation leader Tom Miller was delighted with the response “We took this on as a novel way to raise money for Charity. Again the people from Castleblayney have shown their tremendous generosity when it comes to fund raising. A huge thanks to each and every person who help run the event, the atmosphere was amazing right from the off on Saturday morning. Events like these are important to the charities and they also allow the Faughs Club give something back to the local community.” Tom went onto to explain that the participants don’t get much of a rest after cycling on Saturday “Everyone’s focus now turns to completing the Supervalu 5K Run /walk on Sunday the 30th of November. The trainers have been delighted with the overall improvements in people fitness and we will continue to strive to get everyone to complete 5K before the end of the twelve week program. This Friday which is Halloween night sees a 80’style fancy dress circuits in Rath Na nOg, we are telling people not to fret about the outfit as fancy dress is optional but recommended that either way a good laugh and a good workout is assured.” Now that’s sounds like great fun, well done to all at Operation TransFAUGHSmation.